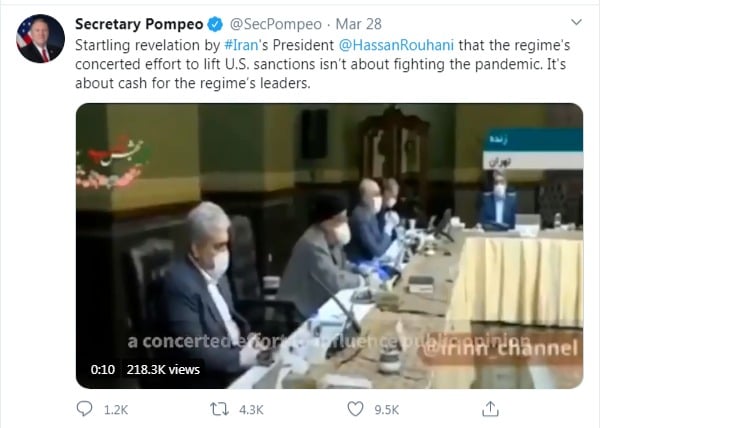 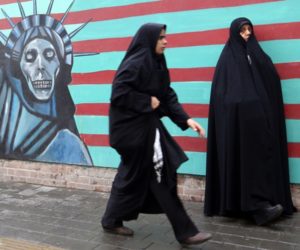 The theocracy that rules Iran is blatantly lying about just how many of its citizens are dying from the coronavirus and understating what precautions need to be taken to fight the pandemic, a prominent leader of the Iranian opposition told Newsmax.

These charges against the Tehran regime were leveled in a teleconference Thursday morning by Muhammad Mohaddessin, chairman of the Foreign Affairs Committee of the National Council of Resistance of Iran (NCRI) — by far the largest of groups opposed to Islamic government that has ruled Iran since 1979.

Mohaddessin’s charges come at a time when, in his words, “all across the country, in all age groups, people are perishing.” In contrast to official government claims that there are only 2,077 coronavirus-related deaths as of March 25, Mohaddessin declared that “more than 11,500 people in 222 cities across Iran have died as of March 25.”

This pattern of official lying, he insisted, has been going on since figures related to coronavirus death cases were first collected and released on March 1.

“At that time, the government claimed only 54 had died from the virus when the actual figure was 650 deaths,” said Mohaddessin, the son of a Grand Ayatollah of Iran and himself a onetime prisoner of the late Shah of Iran.

Pressed by Newsmax as to how he obtained the higher death count that he insisted was accurate, Mohaddessin replied: “Sources within the regime — among them doctors and nurses — and some of our activists died [getting the accurate information].”

He added that the figures were obtained by reviewing records at hospitals, cemetaries, and health centers and contrasting their figures with the official figures put out by Tehran.

In terms of precautions against coronavirus, Mohaddesin insisted “there are no plans to quarantine, and the government maintains ‘[i]t’s against the country’s revolution to shut down businesses [due to the virus]….we must not let this happen.’” 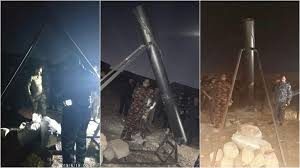 Qayyarah Base (Iraq) (AFP) – Two rockets slammed into the Iraqi capital’s high-security Green Zone early Thursday, hours before US-led forces were set to pull out of a second base in the country. Some 7,500 foreign troops are in Iraq as part of the US-led coalition helping local troops fight jihadist remnants, but those numbers are being significantly drawn down this month.

The alliance is temporarily bringing some trainers home as a precautionary measure against the coronavirus pandemic and is also leaving some Iraqi bases altogether.
Those bases and foreign embassies, particularly the American mission, have been targeted in more than two dozen rocket strikes since late October.

The attacks, which the US has blamed on an Iran-backed armed group, have prompted fears of a proxy war on Iraqi soil.Before dawn on Thursday, two rockets punched into an empty square near an Iraqi security headquarters in the Green Zone, where government buildings and foreign embassies are based, Iraqi security forces said in a statement.

An Iraqi security source told AFP the intended target appeared to be the US embassy, a sprawling compound a few hundred metres (yards) further south on the banks of the Tigris.
There were no reports of casualties, but other attacks have been deadly. 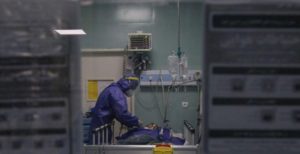 According to local sources, on March 28, only in Qarchak Varamin, 28 people lost their lives to Coronavirus. Medical staff at Bahonar Hospital in Karaj say that between 30 to 40 people die every day in the hospital. Only in Nasimshahr (a city southwest of Tehran) 18 people have died. The death toll in Delijan is 50. At Gorgan hospitals, Basiji and IRGC guards have threatened the hospital staff not to give anyone any information about the death toll and the hospital status or take any photographs.

The representative of the regime’s Minister of Health in Mazandaran and Golestan provinces said the epicenter of Coronavirus has now transferred to the villages. Mustafa Moin, head of the Supreme Council of the Medical System and former Ministry of Science, Research and Technology in Rafsanjani and Khatami’s cabinets, wrote to Hassan Rouhani: “The losses of a large number of the medical community, as well as the higher mortality of patients compared to other countries, will always remain as a shame.” He added that “It is being warned that fatigue and the physical and mental toll on the medical staff will threaten the quality of treatment for patients.” He warned, “pretending that the situation is normal and creating a false sense of security under the pretext of avoiding anxiety and stress could be dangerous, and the consequences of stress are far less than the sudden exposure to a human catastrophe,” 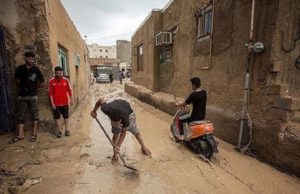 Dozens of people have been killed and injured in the horrific floods that are spreading across 19 Iranian provinces and causing gave damage to areas already hit hard by the government’s 40 years of neglect.

The floods have hit residential areas and farms, which will affect food supply, in Bushehr, Chahar Mahal & Bakhtiari, East Azerbaijan, Fars, Golestan, Gilan, Hormozgan, Kerman, Khorasan Razavi, Khuzestan, Kohgiluyeh and Boyer Ahmed, Mazandaran, Markazi (Central), North Khorasan, South Khorasan, Semnan, Sistan & Baluchistan, Qazvin, and Qom.
This is especially difficult because it is happening at the same time (and in many of the same places) as the coronavirus pandemic is overwhelming the healthcare system and grinding the already-dire economy to a halt.

Iranian opposition President Maryam Rajavi expressed her condolences to those who have lost loved ones, houses, and their livelihood to the floods. Rajavi, the head of the National Council of Resistance of Iran (NCRI), called on neighboring areas to rush to the flood victims’ support.

The Iranian government is, as usual, trying to downplay the floods with Emergency Organization spokesperson Mojtaba Khaledi claiming in an interview with the state-run ISNA news agency that only 11 provinces have been affected with 12 deaths and 21 people injured.

According to weather reports, over 50 millimeters of rainfall flooded that province, causing what local officials estimate to be 401 billion rials (around $2.43 million) worth of damage.

Meanwhile, in Iranshahr, 11 bridges have been destroyed, the road to Bam is blocked, and floodwaters in Borazjan are creeping over the tops of vehicles, with all markets being closed.

In Kerman, more than 10,000 hectares of farmland are flooded, with fields of wheat, tomato, watermelon, vegetables, and flowers destroyed, which has caused damages of 5 trillion rials (around $30 million) to the already deprived farmers.

Just like with the coronavirus crisis, the authorities are unwilling to cope with these disasters. The government has the money to quarantine the country, provide food, fully fund the healthcare system, provide emergency shelter, and everything else. But they won’t, because the mullahs see nothing as more important than their wealth and survival.

“I also want to call attention to the Iranian regime’s misinformation campaign surrounding the origination of the Wuhan virus. Instead of focusing on the needs of the Iranian people and accepting genuine offers of support, senior Iranians lied about the Wuhan virus outbreak for weeks.”

The Iranian leadership is trying to avoid responsibility for their grossly incompetent and deadly governance. Sadly, the Iranian people have been suffering these kinds of lies for 41 years. They know the truth: The Wuhan virus is a killer and the Iranian regime is an accomplice.” 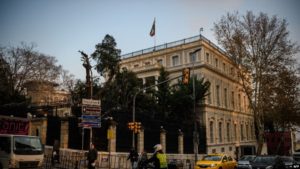 The accusation is likely to strain ties between Turkey and Iran, two regional powers which had grown closer under the government of Turkish President Tayyip Erdogan.

Masoud Molavi Vardanjani was shot dead on an Istanbul street on Nov. 14, 2019, a little over a year after the Turkish officials say he left Iran.

A police report into the killing, published two weeks ago, said Vardanjani had an “unusual profile”. It said he worked in cyber security at Iran’s defense ministry and had become a vocal critic of the Iranian authorities.

According to the report, Vardanjani had posted a message on social media targeting Iran’s elite Revolutionary Guards in August, three months before he was shot dead.

“I will root out the corrupt mafia commanders,” the post said. “Pray that they don’t kill me before I do this.”
Reuters was unable to independently confirm either Vardanjani’s position at the Iranian defense ministry or his social media posts.

No one at the Iranian embassy and consulate in Turkey responded to calls on Friday seeking comment on Vardanjani’s background or death. Asked about possible Iranian government involvement in the killing, a spokeswoman for Istanbul’s police said the investigation was continuing and declined to comment further.

A week after the killing, U.S. Secretary of State Mike Pompeo described it as “another tragic example in a long string of suspected Iran-backed assassination attempts” of Iranian dissidents. He did not elaborate further.

Turkish authorities did not publicly accuse the Iranian government of involvement at the time. But the two senior Turkish officials said that the Turkish government would now raise Vardanjani’s killing with Iran and one of them said that Turkish prosecutors were also following the case.

The suspected gunman and several other suspects, including Turks and Iranians detained in the weeks after the killing, told authorities they had acted on orders from two intelligence officers at the Iranian consulate, the first official said. 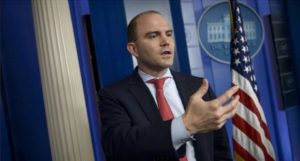 The architects of the Obama administration’s self-described pro-Iran echo chamber have used the coronavirus outbreak to argue that U.S. sanctions are to blame for the virus’s aggressive spread across the Islamic Republic—a line the Iranian government is also peddling.
Former Obama officials and their allies have argued that the United States is depriving Iranian citizens of much-needed food and medical supplies by continuing to impose sanctions as the coronavirus has devastated the country. Trump administration officials say, however, that humanitarian channels have remained open to Iran since before the virus erupted.

Ben Rhodes, the Obama deputy national security adviser and creator of what he described as an echo chamber—media and think-tank support for the Obama administration’s efforts to ink the landmark nuclear accord—argued that the United States is committing a “moral abomination” by refusing to lift sanctions.

“It is a moral abomination that the United States is continuing to enforce sanctions on Iran while its people die because of a virus that threatens all humanity,” Rhodes wrote on Twitter.These arguments were soon echoed by MSNBC host Chris Hayes who called the U.S. sanctions against Iran “sociopathic madness.”

“I understand there is so much pressing news and things we need to be doing right now, but refusing to relax sanctions against Iran right now is sociopathic madness,” Hayes wrote on Wednesday.

The Trump administration is aggressively pushing back against these claims, citing current sanctions exceptions for critical medication and humanitarian supplies. These channels have been open since before the coronavirus broke out and they continue to provide Tehran with the ability to counter the virus’s spread, these officials said.