TOPSHOT – Rescue teams work at the scene after a Ukrainian plane carrying 176 passengers crashed near Imam Khomeini airport in the Iranian capital Tehran early in the morning on January 8, 2020, killing everyone on board. – All 176 people on board a Ukrainian passenger plane were killed when it crashed shortly after taking off from Tehran on January 8, Iranian state media reported. State news agency IRNA said 167 passengers and nine crew members were on board the aircraft operated by Ukraine International Airlines. (Photo by – / AFP) (Photo by -/AFP via Getty Images) 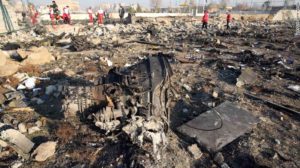