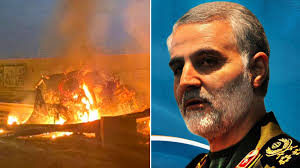 As the world reacted Friday to the U.S. killing of Iranian General Qassem Soleimani, Iranian resistance groups hailed the move as a “major blow” for the repressive regime in Tehran — predicting that it will boost the morale of dissidents and bring what they see as the likely downfall of the regime’s one step closer.

“It is so significant because it has delivered a major, major blow to the Iranian regime, not just to their terror operations in Iraq, Syria, Lebanon and the rest of the region, but in terms of their own operations inside Iran,” National Council of Resistance of Iran (NCRI) Deputy Director Alireza Jafarzadeh told Fox News in an interview Friday.

Soleimani, the head of the Iran Revolutionary Guard Corps’ Quds force, was taken out early Friday local time in a U.S. strike in Iraq directed by President Trump. Trump hailed the strike as a win not only for the U.S., but also for the people of Iran — alleging he was responsible for the killings of thousands of protestors in Tehran.

“While Iran will never be able to properly admit it, Soleimani was both hated and feared within the country,” he said. “They are not nearly as saddened as the leaders will let the outside world believe. He should have been taken out many years ago!”
click to read more 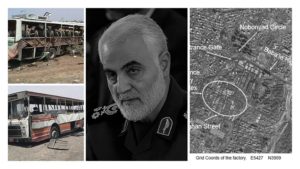 Who Was the Vicious Criminal Qassem Soleimani
NCR-Iran.org, January 5, 2020

The overwhelming majority of Iranians despised Soleimani, an infamous symbol of the regime’s intimidation and murder, for his crimes against the Iranian people and throughout the region. The Iranian people and Iraqi protesters who have been calling for Soleimani’s expulsion from Iraq for some time welcomed his death as a sign of the waning of the regime’s control over their country.

Soleimani, carrying the rank of major general, was Khamenei’s hatchet man and a hated figure. During uprisings in Iran in 2018 and 2019, protesters tore up and torched his posters in different cities.
Qassem Soleimani was born on March 11, 1957, in a village near the town of Baft, in the southeastern province of Kerman. He did not finish his elementary education. He worked as an unskilled construction laborer while he was very young. He did not receive any military training. Yet he rose to the top of the IRGC command because of his ruthlessness and loyalty to the regime’s Supreme Leader.

In 1998, Soleimani was appointed as the commander of the terrorist Quds Force, the extraterritorial arm of the Islamic Revolutionary Guard Corps (IRGC).

The terrorist Quds force is a military body founded shortly after the 1979 revolution with the sole purpose of suppressing domestic opposition and waging terrorist wars beyond Iran’s borders.
The mandate of the IRGC is to expand the fundamentalist ideology of the mullahs through killings, terrorist acts, and hostage-taking.

The Quds Force plays a very special role in the IRGC and is tasked with orchestrating the regime’s meddling in countries of the Middle East region, from Iraq to Syria and Yemen, and as far as the African continent. 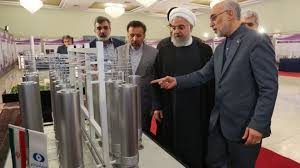 Iran is withdrawing from the 2015 nuclear deal after Trump ordered deadly strike on its top general
Business Insider, January 5, 2020

Iran on Sunday announced it’s withdrawing from the 2015 nuclear deal, just days after President Donald Trump ordered a strike that killed its top military leader, Maj. Gen. Qassem Soleimani. Iranian state TV said Iran will no longer comply with any of the limits of the deal, The Associated Press reported, which effectively means it will no longer adhere to limitations on uranium enrichment, its amount of stockpiled uranium, and research and development.

This move could be perceived as the country taking a big step toward obtaining a nuclear weapon.
But Iran also said it will continue to cooperate with the International Atomic Energy Agency, the United Nations’ nuclear watchdog, and would return to the nuclear agreement if sanctions against it were lifted, according to the New York Times.

“The Islamic Republic of Iran will end its final limitations in the nuclear deal, meaning the limitation in the number of centrifuges,” the Iranian government said in a statement, per the Times. “Therefore Iran’s nuclear program will have no limitations in production including enrichment capacity and percentage and number of enriched uranium and research and expansion.”

The White House did not immediately respond to a request for comment from Insider on this development.

The deal, which was orchestrated by the Obama administration, had been crumbling ever since Trump withdrew the US from it in May 2018. Trump’s decision to pull the US from the nuclear deal is widely viewed as the catalyst for a series of escalatory events that have raised fears of a potential war.

Iran remained in compliance with the landmark pact for roughly a year after Trump pulled the US from it, but began to take steps away from the agreement as tensions rose with the US over the course of 2019. 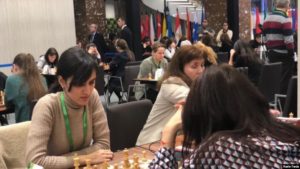 “She has no place in the Islamic Republic’s national team anymore,” the president of Iran’s Chess Federation, Mehrdad Pahlavanzadeh, announced on Thursday and claimed that Hejazipour who lives in France had privately registered for competing in Moscow games.

The Islamic Republic requires Iranian female athletes to respect the so-called Islamic dress code and hijab in all international tournaments. The 27-year old Iranian grandmaster was expelled after gloriously playing for her homeland for eighteen years. She is the first Iranian female athlete to represent Iran without wearing the hijab In the four-decade history of the Islamic Republic.

The president of Iran’s Chess Federation also claimed that he officially informed the International Chess Federation (FIDE) that only Sara Khademeosharia and Atousa Pourkashiyan were representing Iran as soon as he found out about Hejazipour’s registration in the Moscow championship games despite the fact that during the games FIDE was announcing Hejazipour’s performance as one of Iran’s representatives on an hourly basis.

Error: An access token is required to request this resource.
Type: OAuthException
Solution: See here for how to solve this error
X