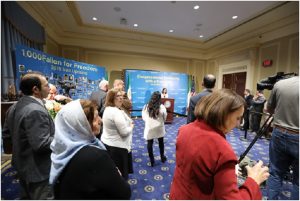 Bipartisan members of congress joined Iranian Americans from across the U.S. at a House Briefing titled,” Iran Uprising: The Nation Rises for Freedom,” and expressed support for ongoing protests in Iran urged the international community to hold Iranian regime accountable for indiscriminate and deadly use of force.

Ms. Homeira Hesami, a prominent leader of Iranian American Communities opened the event by welcoming the staffers, representatives of media and the Iranian American activists. In her opening remarks, she said, “The people of Iran want international recognition of their resistance to this regime. Congress can be loud and clear on Iran’s human rights record. There are ongoing executions, every day there is a message of resistance from Iranian political prisoners – we should speak in their defense. We must speak in defense of women’s movement, labor, environmentalists, children and youth. There are daily examples in the ongoing protests that needs to be talked about and raised – as a point of global objection to the regime and its policies/actions. That is why it’s so important for your office to support the Iranian people protests for a Free Iran.”

In his remarks Representative Brad Sherman (D-CA) of the House Foreign Affairs Committee applauded Iranian people for rising against religious tyranny and noted specially, his longstanding support for Iranian resistance leaders now living in Albania. “I was the lead democrat in introducing H.Res.374 which supports the people of Iran’s rights to free expression and condemns the Iranian regime for its crackdown on legitimate protests,” Congressman Sherman called on the President to enforce the laws congress has already passed that prevent the export of censorship technology to Iran,” including the “Comprehensive Iran Sanctions and Accountability Act provides those very limitations.” 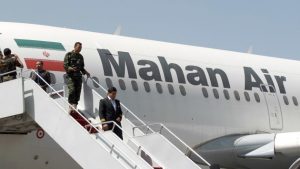 US slaps sanctions on Iran’s biggest airline and shipping group
Secretary of State Mike Pompeo sanctions the Islamic Republic of Iran Shipping Lines, its China-based subsidiary, E-Sail Shipping, and Mahan Air, saying the companies are aiding the Iranian regime’s alleged proliferation of weapons of mass destruction.
The sanctions on IRISL and E-Sail will take effect in 180 days to give customers who ship humanitarian goods time to adjust their contracts. The sanctions on Mahan Air will take immediate effect.
Iranian President Hassan Rouhani says Tehran will overcome U.S. sanctions by bypassing them or through negotiations.
CNBC, Dec 11, 2019

WASHINGTON — The U.S. will impose a fresh round of sanctions on Iran’s largest shipping company and biggest airline, the nation’s top diplomat announced Wednesday.
Secretary of State Mike Pompeo targeted the Islamic Republic of Iran Shipping Lines, its China-based subsidiary, E-Sail Shipping, and Mahan Air, saying the companies are aiding the Iranian regime’s alleged proliferation of weapons of mass destruction.

“As long as its malign behaviors continue, so will our campaign of maximum pressure,” Pompeo said Wednesday, adding that the transportation firms helped to “augment the regime’s campaign of terror and intimidation at home and throughout the world.”

The sanctions on IRISL and E-Sail will take effect in 180 days in order to give customers who ship humanitarian goods time to adjust their contracts. The sanctions on Mahan Air, however, will take immediate effect. Earlier this year, Germany and France announced a ban on Mahan Air, in part, alleging the firm transports Iranian weapons and personnel to Syria. 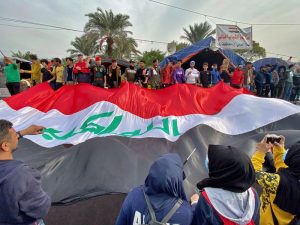 Rockets struck Baghdad’s international airport compound Thursday, as the country tries to contain anti-government protests which have shaken the foundation of the Iraqi government. The attack appears to be the latest in what a senior U.S. military official described as a dangerously escalating campaign by Iran-backed militias.

The protests, which have swept cities from Baghdad to Basra over the last two-and-a-half months, have laid bare the Iraqi government’s limited ability to control Iran-backed paramilitary forces that are now part of the country’s official security forces. And they have raised fears that tensions among the largest of roughly 30 different Iran-backed groups will divert attention from fighting a resurgent ISIS.

More than 450 protesters have been killed since the anti-government protests began Oct. 1 — many of the deaths blamed on Iran-backed militia forces. Demonstrators have demanded an end to what they consider an Iranian stranglehold on Iraq’s security, politics and economy — posing the biggest threat to Iranian influence in Iraq since 2003. Although the demonstrations have been largely peaceful, in the holy cities of Najaf and Karbala, protesters set fire to the Iranian consulates, along with a shrine tied to an Iran-backed political figure.

Demonstrators have also demanded a new Iraqi government. Iraq’s prime minister recently resigned in response to the protests and the Iraqi parliament is under pressure to pass reforms to limit the influence of traditional political parties. 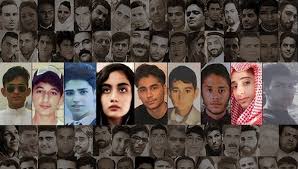 As more news comes out about the crackdown on the Iranian uprising, we’re hearing of horrific crimes against humanity being committed, including deaths under torture.

At least 1,500 protesters, including several children, were murdered by the Iranian authorities since November 15, while 4,000 were injured and 12,000 were arrested. Many wounded people were taken from hospitals by Iranian security forces and intelligence officers.

The fate of the imprisoned remains largely unknown, but there are several reports of protesters being tortured in Shiraz, Tehran, and Karaj. Here are just some examples.

Hamid Sheikhani, 35, was arrested on November 17 in Mahshahr County, Khuzestan. His family heard no news until November 23, when they were asked to collect his body from prison. The father-of-one was healthy when he was arrested, according to local reports, so his death raises serious concerns about his treatment.

Also on November 17, 30-year-old Kaveh Veisani was arrested in Sanandaj. His dead body, which showed signs of torture, was found in the city’s suburbs on December 15. He had a toddler and his wife was pregnant.

While 17-year-old Arvin Ranin was arrested by the Islamic Revolutionary Corps (IRGC) forces in Marivan and was reportedly tortured to death. His family had to pay to have his body returned.
Halimeh Samiri was arrested during the protests in Abadan. She was tortured to death by the IRGC, who later threw her lifeless body outside her father’s residence.

These protests began on November 15 after the government tripled the price of fuel overnight, but the quickly spread to nearly 200 cities and took on a political nature, calling for regime change.
Supreme Leader Khamenei dismissed the protesters as “hooligans” in a televised speech and the regime mobilized all its forces against the November Iran protests, opening fire indiscriminately on any gathering of over 10 people.