Iran, November 16, 2019—Numerous cities across Iran are witnessing escalating protests in response to a gasoline price hike imposed by the mullahs’ regime in Iran. People in Tehran and other major cities throughout the country are blocking roads and highways in their sign of protests. 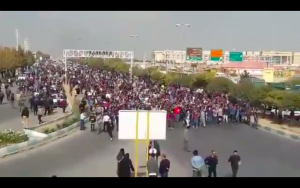 Violent protests against the Mullah’s regime continue to spread across 107 cities according to resistance sources within the country. At least 61 protesters have been killed with the actual number most likely far higher.

An especially ominous development for the regime came today when reports filtered out that two commanders of IRGC Fajr Corps in Shiraz were shot and killed by another officer, when they ordered the IRGC to open fire on the protesters, according to sources.

Below is an intercepted radio broadcast of IRGC communications by the Iranian Resistance.

Link entails the intercepted radio communications between repressive security forces in the city of Robat Karim (near Tehran) and IRGC Brigadier General Hossein Rahimi, head of Great Tehran State Security Force. It provides a good sense on the state of affairs in Iran in general and the state of security apparatus in particular.

In the communication, the commander of the regime’s forces acknowledges that 5000 people are heading towards the Governorate office in Robat Karim (in the suburbs of Tehran). He warned that if immediate action would not be taken, the Governorate would fall! (and it did). 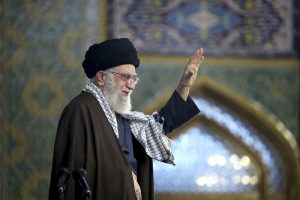 DUBAI, United Arab Emirates — Iran’s supreme leader on Sunday cautiously backed the government’s decision to raise gasoline prices by 50% after days of widespread protests, calling those who attacked public property during demonstrations “thugs” and signaling that a potential crackdown loomed.

The government shut down internet access across the nation of 80 million people to staunch demonstrations that took place in a reported 100 cities and towns. That made it increasingly difficult to gauge whether unrest continued. Images published by state and semiofficial media showed the scale of the damage in images of burned gas stations and banks, torched vehicles and roadways littered with debris.

Since the price hike, demonstrators have abandoned cars along major highways and joined mass protests in the capital, Tehran, and elsewhere. Some protests turned violent, with demonstrators setting fires as gunfire rang out.

It remains to be seen how many people were arrested, injured or killed. Videos from the protests have shown people gravely wounded. Iranian authorities on Sunday raised the official death toll in the violence to at least three. Attackers targeting a police station in the western city of Kermanshah on Saturday killed an officer, the state-run IRNA news agency reported Sunday. A lawmaker said another person was killed in a suburb of Tehran. Earlier, one man was reported killed Friday in Sirjan, a city some 500 miles southeast of Tehran. 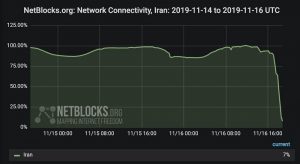 As Protests Spread Across Iran, Regime Shuts Down the Internet
Ncr-Iran.org , November 18, 2019

Iran’s regime has shut down the country’s internet to prevent news of the nationwide uprising in Iran and the deadly crackdown by the Revolutionary Guards from reaching the outside world.

NetBlocks, a non-governmental organization that monitors cybersecurity and internet freedom, on Sunday, wrote on Twitter, “Iran is now in the midst of a near-total national internet shutdown; realtime network data show connectivity at 7% of ordinary levels after twelve hours of progressive network disconnections as public protests continue.”

Earlier on Sunday, NetBlocks wrote on Twitter: “Update: It has now been 24 hours since Iran implemented a near-total internet shutdown following hours of partial blackouts amid widespread protests. The ongoing disruption constitutes a severe violation of the basic rights and liberties of Iranians.”

The Iranian regime’s shutting down of the internet is a clear violation of the Iranian people’s basic right to Internet access, also known as the right to broadband or freedom to connect, which is the view that all people must be able to access the Internet in order to exercise and enjoy their rights to freedom of expression and opinion and other fundamental human rights, that states have a responsibility to ensure that Internet access is broadly available and that states may not unreasonably restrict an individual’s access to the Internet.

There were other reactions to the regime’s oppressive measures on the internet. Richard Grenell, the United States ambassador to Germany, condemned the shutdown of internet access in Iran and called on large tech companies to support the people of Iran and help restore their access. 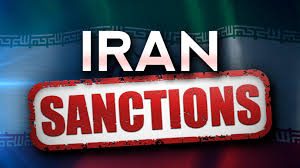 WASHINGTON, Nov 18 (Reuters) – Secretary of State Mike Pompeo said on Monday that the United States is terminating its sanctions waiver related to Iran’s Fordow nuclear plant, adding that it is closely monitoring protests in Iran and is deeply concerned by reports of several fatalities.

“The right amount of uranium enrichment for the world’s largest state sponsor of terror is zero … There is no legitimate reason for Iran to resume enrichment at this previously clandestine site,” Pompeo said at a press briefing about the Fordow site, where the U.N. atomic watchdog says Iran has been enriching uranium.

He added the waiver will be ended Dec. 15.

Pompeo went on to say that Iran was making “another clear attempt at nuclear extortion” that would lead to further economic and political isolation from the world.

Protests have spread across the Islamic Republic since Friday, with Iran’s powerful Revolutionary Guards warning on Monday of taking action if unrest over gasoline price hikes does not cease. At least 100 banks and dozens of buildings and cars have been torched, state media reported.

“We condemn strongly any acts of violence committed by this regime against the Iranian people and are deeply concerned by reports of several fatalities,” Pompeo said. “The Islamic Republic must cease violence against its own people and should immediately restore the ability of all Iranians to access a free and open Internet. The world’s watching.” 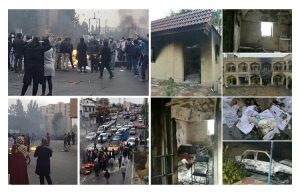 The White House on Sunday condemned Iran for using “lethal force” against demonstrators during the unrest that left two dead and saw authorities arrest dozens and restrict internet access.

“The United States supports the Iranian people in their peaceful protests against the regime that is supposed to lead them,” White House press secretary Stephanie Grisham said in a statement
“We condemn the lethal force and severe communications restrictions used against demonstrators,” she added.

“Tehran has fanatically pursued nuclear weapons and missile programs, and supported terrorism, turning a proud nation into another cautionary tale of what happens when a ruling class abandons its people and embarks on a crusade for personal power and riches,”

Morgan Ortagus spokesperson for the United States Department of State, wrote on Twitter: “We stand by the people of Iran as they demand accountability and transparency from their government. Iran did not use the billions of dollars in JCPOA sanctions relief to build schools or hospitals, but to fund terrorist proxies throughout the Middle East.”

“The United States supports the Iranian people in their peaceful protests against the regime that is supposed to lead them. We condemn the lethal force and severe communications restrictions used against demonstrators.”

“Tehran has fanatically pursued nuclear weapons and missile programs, and supported terrorism, turning a proud nation into another cautionary tale of what happens when a ruling class abandons its people and embarks on a crusade for personal power and riches”, the US Department of State tweeted.
Democratic Senator Robert Menendez wrote on Twitter: “As people peacefully assemble across the Middle East, this weekend in Iran, governments must respect the rights of their citizens to protest and express themselves.” 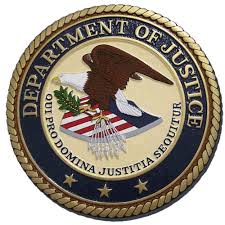 Two Individuals Plead Guilty for Working on Behalf of Iran
Ahmadreza Mohammadi-Doostdar, 39, a dual U.S.-Iranian citizen, and Majid Ghorbani, 60, an Iranian citizen and resident of California, have entered pleas of guilty to charges stemming from their conduct conducting surveillance of and collecting identifying information about American citizens and U.S. nationals who are members of the Iranian dissident group Mujahedin-e Khalq (MEK).

“The defendants both have admitted to conducting surveillance and collecting identifying information for the Government of Iran about Americans, and in particular, individuals who were exercising their First Amendment rights to oppose the Iranian government,” said Assistant Attorney General for National Security John C. Demers. “The Department of Justice is committed to holding accountable governments like Iran that would threaten and intimidate Americans who criticize them.”

“The Iranian government thought it could get away with conducting surveillance on individuals in the United States by sending one of its agents here to task a permanent resident with conducting and collecting that surveillance,” said Jessie K. Liu, United States Attorney for the District of Columbia. “This case highlights our efforts to pursue those who threaten national security and disrupt foreign governments that target U.S. persons.”

Iran: More than 100 protesters believed to be killed as top officials give green light to crush protests