“For over 40 years, Iranian people and the civilized world have in one way or another struggled with destructive policies and actions of the clerical regime in Tehran. Also for 40 years, the Iranian regime had driven a skewed narrative on this important topic – adversely affecting the lives of the Iranian people and to some extent, international policymaking. To help the process of righting this wrong, Organization of Iranian American Community has sponsored a 10-part video series – developed and produced by The Hill. We invite you to review the third segment of this video series. “ 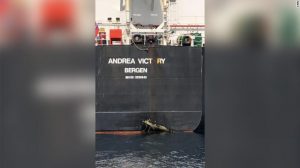 (CNN)Saudi Arabia said Monday that two of its oil tankers had been sabotaged off the coast of the United Arab Emirates, in attacks it described as posing a threat to the security of global oil supplies.

Four tankers were targeted overall, according to the UAE, in what the country said was a “sabotage attack” that took place near the strategic port of Fujairah on Sunday. Tensions have risen in the oil-rich region in recent weeks amid the deployment of a growing number of United States military assets to the Middle East due to deteriorating relations with Iran.

Monday’s developments came as US Secretary of State Mike Pompeo canceled a planned visit to Moscow on Monday and flew to Brussels for talks on Iran with his counterparts from the UK, Germany and France.

Last week, Iran announced it was partially withdrawing from a landmark nuclear deal, the Joint Comprehensive Plan of Action. The US had already unilaterally exited the deal one year prior.
The next day, the US Maritime Administration issued an advisory warning that “Iran or its proxies” could be targeting commercial vessels and oil production infrastructure in the region.