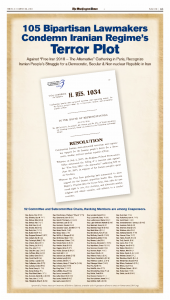 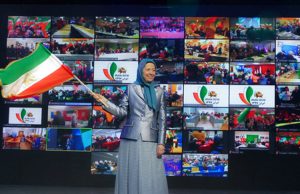 Across 42 locations on three continents, a conference was held on Saturday where Iranians across the world called for international action against the terrorist activities of the Iranian government, as well as its human rights abuses.

Adopting a firm policy toward the Iranian government and support for the Iranian people’s desire for change in their country was the message of the conference.

MRS. RAJAVI, PRESIDENT-ELECT OF THE NATIONAL COUNCIL OF RESISTANCE OF IRAN, WAS THE KEYNOTE SPEAKER. SHE HIGHLIGHTED TWO ISSUES THAT SHE BELIEVES REPRESENTS THE PAST YEAR’S DEVELOPMENTS:

1. The clerical government hasn’t the means to thwart its overthrow.
2. The government’s strategy is crackdown and suppression inside Iran, and the export of terrorism, war and tension to other countries.

In reference to the nationwide protests that began in December 2017 and have continued intermittently to today, Mrs. Rajavi said, “Over the past year, the government repeatedly tried to stifle the uprisings. Every time, however, the embers started glowing from under the ashes.” She noted that the government has been unable to halt the activities of Iranian resistance units.

As well, its terrorist activities against Iranian opposition movement PMOI/MEK has caused an international backlash against the government. She said, “The product of such a political impasse has been a dramatic fall in the government’s political, economic, social and international status.” The government’s use of terrorism in Europe is made even more surprising in that it comes at a time when Tehran is seeking support from the European states to mitigate the effects of the U.S. sanctions that recently came into effect.

On Wednesday December 11, 2018, bipartisan members of United States congress joined Iranian Americans from 40 states at a festive event held on the grounds of the House of Representatives to celebrate the Holiday Season to express support for democracy protesters in Iran. At this gathering, organized by the Organization of Iranian American Communities (OIAC), lawmakers also announced bipartisan congressional support for H.Res.1034 and highlighted Iranian regimes’ malign role within and outside Iran.

Timed to coincide with the anniversary of nationwide protests in Iran, which reignited in late December 2017, the gathering showcased congressional and Iranian American community support for the Iranian people’s uprising.

The demonstrations exploded across the country yet again in December 2017 as, “tens of thousands of protesters have formed the largest outpouring of government opposition since the volatile 2009 presidential elections. The scale and ferocity of the protests had clerical leaders in Tehran struggling.” Developments in Iranian streets, factories, schools, and roads over the past years overwhelmingly affirm the assertion that despite suffocating repression, the protests in Iran have a number of key characteristics and differ from the 2009 uprising:

The public dissent and its topography is intensifying to include various segments, institutions, and geographical local within Iran. The antiestablishment protests, which originally involved some 240 cities and municipalities, have progressively swelled beyond a singular socioeconomic sector of society or economy and now include participation of factory workers, truck drivers, teachers and the Bazaar. In a display of increasing international awareness, U.S. Teamsters issued a statement in October 2018 to express its solidarity with striking truck drivers in Iran.
The protests are getting increasingly more sophisticated, persistent,organized, and deliberate in nature.
Repeated slogans such as “Death to Dictator,” show that people’s demands transcend economic issues and directly target the clerical regime.
The regime, facing increasing international isolation has no answer for the people and is incapable of meeting their legitimate demands. Accordingly, the current wave of uprising is unstoppable.
These legitimate demands and regimes’ violent response is leading to a surprisingly rapid growth in the size, number, and interconnectivity of the already present community of RESISTANCE UNITS.

Secretary of State Mike Pompeo ramped up the campaign against Iran another notch Wednesday by urging the U.N. Security Council to prohibit the Islamic republic from conducting ballistic missile tests.

In a speech to the Security Council, Pompeo trained his criticism on Iran’s ballistic missile activity, saying it had increased since the nuclear deal took force in 2016.
“Our goodwill gestures have been futile correctives to the Iranian regime’s reckless missile activity and all other destructive behaviors,” he said.

Pompeo specifically said the United States will work to impose prohibitions on Iran’s ballistic missile tests that were in effect before the nuclear deal — prohibitions that were largely ignored by Tehran.
“Iran has been on a testing spree and a proliferation spree, and this must come to an end,” he told reporters after the meeting adjourned.

Pompeo’s high-profile appearance at the Security Council underscored the laser focus the administration has placed on painting Iran as the epitome of evil in the world. Almost every day in recent months, officials from the State Department and the Treasury Department have issued statements, imposed sanctions or designated Iranian individuals and entities for their bad behavior.

Hossein Raqfar, an economy expert in Iran, has acknowledged the drastic financial situation facing the regime. Calculations are showing difficult periods ahead even despite what seems, at surface at least, a rebounding currency following the Iranian currency – the rial – plunging to 190,000 against the US dollar.
While the dollar is claimed to sell at around 105,000 rials as we speak, experts are saying even if the rates rise to the regime’s official 42,000 rial the country would be facing deep and widespread recession.
Numerous production units will close down, leading to a significant surge in unemployment. Such developments raise concerns of more people pouring into the streets and a repeat of the Dec 2017 / Jan 2018 uprising.

Such undeniable realities on the ground in Iran leave the regime no choice but to engineer an artificial currency gain, aiming to prevent various imbalances and instabilities, economically, socially and even politically.
Saving face

The Iranian regime is the main element behind all of this country’s economic woes, including the currency crisis. There are a variety of political and social reservations taken into consideration, in line with the old saying of “Ask much to get little.”

The Iranian regime and its array of apologists/lobbyists abroad claim prices in Iran are skyrocketing due to foreign pressures and sanctions. With the currency rates rising artificially, the same voices claim these numbers are dropping due to their management.

These political and psychological schemes are targeting public opinion and seeking to calm a highly restive and potentially uprising society. A staunch reminder is the fact that the rial is hovering at rates three times that of ten months ago. Considering the various aspects in play effecting Iran’s currency rates, the economy is on path to a complete bankruptcy.

“Our equations show Iran’s economy will go bankrupt even with the U.S. dollar trading at 80,000 rials. Huge expenses will be placed on the shoulders of the country’s production lines and families will lose their purchasing powers at unprecedented scales. If rates remain above the 80,000 rial mark, the situation will be even worse,” Raqfar added in his remarks published in Iranian media.

An Iranian political activist, detained in Qom Prison, died in his cell on Wednesday after a 60-day hunger strike.
Vahid Sayadi Nasiri was jailed in 2015 and sentenced to eight years after he was accused of insulting Supreme Leader Ayatollah Ali Khamenei and spreading “propaganda against the state” on his Facebook account, according to the advocacy group Iran Human Rights Monitor.

During his initial detention at Raja’i Shahr and Evin prisons, Iran Human Rights Monitor alleges that Sayadi Nasiri had been harassed by operatives linked to the Iranian regime. The group say he was attacked in May 2017 by a fellow prisoner, and again in February, this time by two offenders. Sayadi Nasiri was released in March having served two-and-a-half years of his sentence, but detained again in August 2018.

He began his hunger strike in October in protest at the conditions of his imprisonment and his lack of access to a lawyer. According to Elaheh Sayadi Nasiri, his sister, Sayadi Nasiri had also requested that he be transferred to Evin Prison, on the outskirts of Tehran. the political activist had argued that being locked up alongside regular criminals was a violation of Iran’s regulations on the principle of separation of crimes.

The U.S. Baha’i community has welcomed a resolution by the U.S. House of Representatives condemning Iran for “state-sponsored persecution” of minority Baha’is in the Islamic Republic.
The House resolution, which also condemns what it calls Iran’s “continued violation” of the International Covenants on Human Rights, passed without objection Wednesday.

The resolution urges President Donald Trump and the State Department to immediately issue a similar condemnation of Iran and demand the immediate release of prisoners held solely on account of their religion. It also urges the Trump administration to impose sanctions on Iranian officials and other individuals directly responsible for serious rights abuses, including abuses against Iranian Baha’is.
Baha’i statement

In a statement emailed to VOA Persian, U.S. Baha’i Office of Public Affairs Director Anthony Vance expressed gratitude to the House for reiterating its concern about rights abuses to which he said Iranian Baha’is are “unjustly subjected.” The Baha’i Office of Public Affairs represents the U.S. Baha’i community in its relationships with the U.S. government, media and public.

“In spite of extraordinary levels of (Iranian) state-sponsored hate propaganda against the Baha’is, as highlighted in the congressional resolution, we are greatly encouraged by reports of the fair-mindedness of the vast majority of Iran’s citizens,” Vance said. “(They) have come to realize in recent decades that their fellow Baha’i citizens are peaceful and seek only to contribute to the progress of their country.”
Iran considers its Baha’is to be heretics with no religion. Rights groups say authorities routinely arrest members of Iran’s estimated 300,000-strong Baha’i minority for expressing or practicing their beliefs.