Rep. Mike Pompeo, R-Kan., is pursued by reporters at the Capitol as the House Republican leadership works to muster votes for final passage of the omnibus spending bill to fund the government, in Washington, Thursday, Dec. 11, 2014. Earlier in the day, conservatives sought to torpedo the measure because it would leave Obama’s immigration policy unchallenged, but Speaker John Boehner patrolled the noisy, crowded House floor looking for enough GOP converts to keep it afloat. (AP Photo/J. Scott Applewhite) 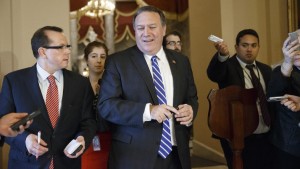