U.S. President Barack Obama, with Secretary of State John Kerry (2nd R) at his side, meets with a group of veterans and Gold Star Mothers to discuss the Iran nuclear deal at the White House in Washington September 10, 2015. Gold Star Mothers is an organization of mothers whose children have died while serving the U.S. in war or times of conflict. REUTERS/Kevin Lamarque – RTSIDU 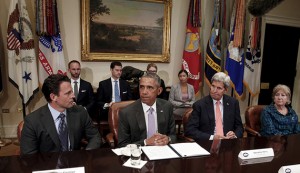