Tears For Paris And Prison For Cartoonist
Iran Human Rights 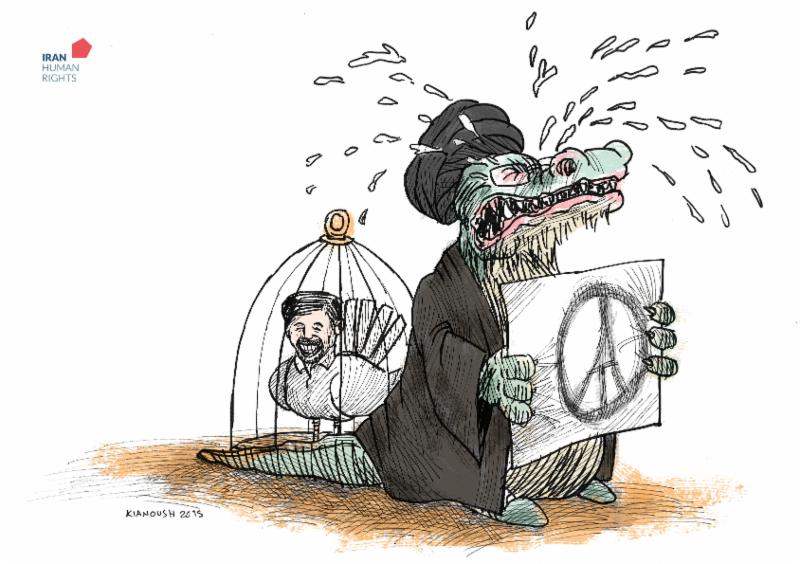 Iranian authorities continue their crack down of the freedom of expression, while the world attention is on Paris: Now Hadi Heidari, a well-known Iranian cartoonist imprisoned.

Is the Obama administration aware that it is trusting and dealing with a country that has just broken the world record in executions? Of course the President is aware of that, and it seems that he has decided to turn a blind eye to Iran’s increasing aggression and oppression inside and outside of its own country.
According to the recent and fifth report by the special United Nations investigator of human rights, human rights violations in Iran are rising even since the nuclear agreement was reached. Accordingly, execution rates have been increasing at “an exponential rate” in Iran. In 2014, 753 were executed and at least 694 people (including women and juveniles) were executed from January 2015 till mid-September. This is reported to be the highest rate of execution the Islamic Republic has had in 25 years.

UNITED NATIONS (Reuters) – The U.N. General Assembly’s human rights committee on Thursday criticized Iran for cracking down on activists, journalists and dissidents and its increased use of the death penalty, a rebuke Tehran dismissed as “Iranophobia.”

The non-binding resolution, which was drafted by Canada, was adopted by the 193-nation assembly’s Third Committee with 76 votes in favour, 35 against and 68 abstentions.
The resolution was not entirely critical. It also welcomed pledges by Iranian President Hassan Rouhani on “important human rights issues, particularly on eliminating discrimination against women and members of ethnic minorities, and on greater space for freedom of expression and opinion.”
However, it noted the “alarming high frequency” of the death penalty in the Islamic Republic. The resolution said Iran continued to execute minors in violation of international conventions it has signed.

An Iranian journalist and political activist said on Wednesday she had been sentenced to one year in jail after being found guilty of spreading propaganda against the Islamic Republic.
Reyhaneh Tabatabaei, 35, told Reuters her lawyer was informed on Tuesday of the sentence, which also included a two-year ban on joining political parties and writing for any newspaper or website.
It came a day after authorities arrested a cartoonist and sent him to prison to complete a suspended jail sentence, the latest in a series detentions of journalists, artists and activists.
Tabatabaei had been arrested twice in the last five years and had spent almost six months in Evin prison, two months of it in solitary confinement. Her last hearing in the Islamic Revolutionary Court was in November last year.

Iran Human Rights (NOV 16 2015): From Thursday November 12 until today, Iranian authorities have executed at least six prisoners in two different prisons. Most of the hangings were carried out for alleged drug offenses.
On Saturday November 14, a Pakistani citizen, identified as Younes Jamaloldini, was reportedly hanged at Zahedan Central Prison on alleged drug charges. According to close sources, Jamaloldini was around 35 years old and had been transferred from his prison ward to solitary confinement in preparation for his execution.
“Currently there are at least nine Pakistani citizens in Zahedan Central Prison, five of them are sentenced to death for drug trafficking, the rest of them are sentenced to life in prison. Aside from one of them, the youngest is being held in the juvenile ward, the rest are being held in ward 7. There are also more than 15 Afghan citizens in the same ward, most are sentenced to death,” says an informed source who has requested to be anonymous.

Iran’s supreme leader, at a meeting with Russian President Vladimir Putin in Tehran, said on Monday U.S. policies in the Middle East region were a threat to both countries and called for closer ties between Tehran and Moscow.
The civil war in Syria has evolved into a wider proxy struggle between global powers, with Russia and Iran supporting Syrian President Bashar al-Assad while Western powers, Turkey and Gulf Arab states want him out.
“The Americans have a long-term plot and are trying to dominate Syria and then the whole region … This is a threat to all countries, especially Russia and Iran,” Ayatollah Ali Khamenei said, according to his website, at the meeting on the sidelines of the Gas Exporting Countries Forum (GECF) Summit in Tehran.

While much has been said about the dangers of Sunni foreign fighters returning home, the return home of the far more numerous Afghan and Pakistani Shia foreign fighters has received noticeably less attention. A major reason for the disparity is that most accounts of the Afghan and Pakistani troops fighting under the Hezbollah flag in Syria mistakenly tend to minimize their ideological motivations. However, the Shia foreign fighter phenomenon could have serious ramifications for South Asia, because it serves as a pretense under which Tehran trains and indoctrinates militant Shia populations.

The liwa’ fatimiyun (Fatimiyun Brigade) is composed exclusively of Afghans and fights under the auspices of Hezbollah Afghanistan. According to an Iranian news source, the number of Afghans fighting for the Assad regime is between10,000 and 20,000, while other news sources put the number of Afghans atbetween 10,000 and 12,000. There is no doubt that Afghans have paid a heavy price in the fighting, as 700 Afghans are thought to have been killed in action around Aleppo and Deraa alone. Many of those tracking the number of funeralsfor Afghans fighting in Syria came up with numbers closer to the regime’s official narrative of 100 dead, because the bodies of Afghan fighters are often not recoverable and simply left to rot if they lie in rebel-held territory.

This in turn legitimises Iran’s military engagement in Syria, which Washington considers as one of the root causes of emergence of Daesh in that country. In that sense, the terrorist attacks in Paris came as manna from heaven for Tehran.”

The Franco-Iranian alliance is likely to prove fragile, Alfoneh argued, because Paris and Tehran pursue opposing goals. “While Paris is committed to annihilation of Daesh, survival of the Assad regime is Tehran’s goal,” he said. In Syria, some analysts say, Tehran is itself prioritising the fight against the Syrian opposition over the fight against Isis.

“To this end, Tehran keeps alive Daesh as a useful enemy, which not only makes Bashar al-Assad appear as the lesser evil, but also legitimises Iran’s military intervention in Syria and provides president Rouhani with access to European capitals as a key player in the conflict.”

Mohammad Marandi, a Tehran University professor who is close to senior officials at the Iranian establishment, disagrees with Alfoneh over Iranian motives. He blames the US and its European allies for the deteriorating situation in Syria and the rise of Isis but said the west could find a suitable partner in Tehran if it “corrected” its policy in the Middle East.

A drone crashed in southwestern Iran near the Iraqi border on Saturday, media reported, though there were differing accounts on whether it was a foreign or a domestic aircraft.
Fars news agency quoted the governor of Shush county in Khuzestan province saying a foreign surveillance drone had come down near the city of Shush.
Later, state news agency IRNA quoted the same official, Reza Nejati, saying it was an Iranian machine and denying he had ever said otherwise.
“This drone was flying a daily route inside the country,” Nejati was quoted as saying by IRNA. He said technical issues brought it down.

To Crush ISIS, Assad Must Go and Iran’s Wings Must Be Clipped
The Newsweek
Giulio Maria Terzi 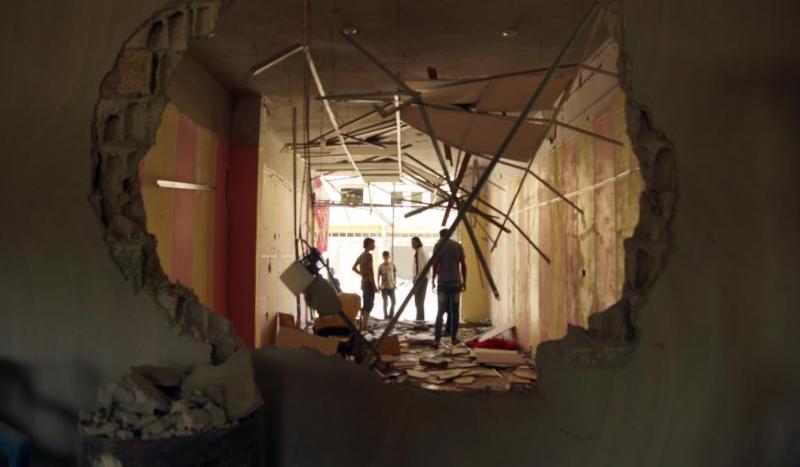 Images of people pouring out of a concert hall, many wounded and others lying facedown in a pool of blood. Explosions during a football match and looks of fear, pain and horror. This is what the world saw in France last week, something it saw less than a year ago and in previous years-acts of violence and the terrible wounds they leave on innocent people.
Just as summer turns into autumn, autumn to winter and winter to spring, this attack is also part of a cycle, and there is a good chance it will be followed by another in the near future. Islamic fundamentalist organizations such as the Islamic State militant group (ISIS) are trying to overpower Western democracies on our own soil, and we must act urgently to halt their advances.

“It [the establishment of the bank] could be done very soon, depending on technical issues and how they could be resolved,” Mehdi Mohtashemi told RIA Novosti.

“The initial capital will, probably, total $500 million. The capital could be increased when the cooperation in trade and joint projects grows,” Mohtashemi stressed, adding that the bank will initially focus on investment in bilateral trade and other joint economic projects.

WASHINGTON – As President Obama begins his three-week push to win approval of the Iran nuclear deal, he is confronting this political reality: His strongest argument in favor of passage has also become his greatest vulnerability.
Mr. Obama has been pressing the case that the sharp limits on how much nuclear fuel Iran can hold, how many centrifuges it can spin and what kind of technology it can acquire would make it extraordinarily difficult for Iran to race for the bomb over the next 15 years.
His problem is that most of the significant constraints on Tehran’s program lapse after 15 years – and, after that, Iran is free to produce uranium on an industrial scale.
“The chief reservation I have about the agreement is the fact that in 15 years they have a highly modern and internationally legitimized enrichment capability,” said Representative Adam B. Schiff, a California Democrat who supports the accord. “And that is a bitter pill to swallow.”

My visit to Iran Rights Violations