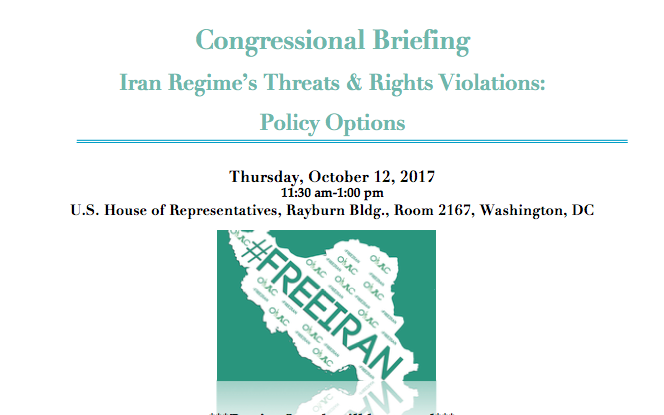 Bipartisan Members of Congress will also attend the briefing and share their views on U.S. Policy towards Iran.
The event is scheduled for Thursday, October 12th, 2017 from 11:30am-1pm at 2167 Rayburn House Office Building.
RSVP: Please CLICK!

Caught in a web of repression: Iran’s human rights defenders under attack

Iran is waging a ruthless crackdown against people who stand up to injustice and defend human rights. The country’s courageous human rights defenders have come under suffocating levels of repression at the hands of Iran’s judicial and security apparatus.
Scores of human rights defenders, including anti-death penalty campaigners, women’s rights activists, trade unionists, minority rights activists, human rights lawyers, and activists seeking truth, justice, and reparations for the mass extrajudicial executions and enforced disappearances of the 1980s are facing lengthy prison sentences in connection with their peaceful activities, and many others are being subjected to surveillance, interrogations and drawn out trials. Those who defend human rights are often labelled “foreign agents” and “traitors” by state media, and prosecuted and jailed by the authorities on bogus “national security” charges.

Iran: Blamed for failing to curtail trafficking in women and children 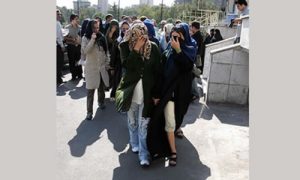 Iran was among the countries failing to crack down on human trafficking, the White House announced.
“As reported over the past five years, Iran is a source, transit, and destination country for men, women, and children subjected to sex trafficking and forced labor,” the State Department’s annual report – 2017 wrote.
In its 2016 report the State Department said, “The Iranian Regime failed to achieve minimum standards to eliminate human trafficking and had no significant effort on this issue.” (Reuters – October 1, 2017) 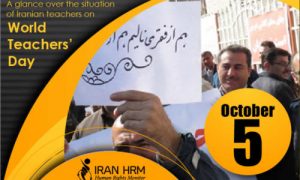 World Teachers’ Day, is observed every year on October 5 since 1994,
aiming to raise awareness about the importance of the role played by teachers worldwide.
In democratic countries, teachers are a cultural sector who play a significant role in educating future generations and advancing the society.
In Iran, however, teachers are not given the opportunity to play a constructive role in education. Under the pressure of poverty, they fail to fulfill even the minimum educational duties.
Teachers are grossly underpaid and sometimes they do not receive their meager salaries for several consecutive months. Iranian teachers also are deprived of insurance, bonuses and other benefits. 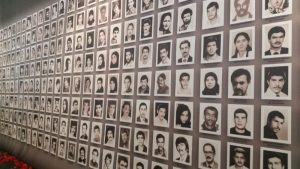 In the 1990s, I and my distinguished colleague Charlotte Ponticelli had the privilege of working with Dr. Clyde Snow, one of the world’s foremost experts in forensic anthropology, who played an instrumental role in bringing justice to Argentina by uncovering the mass graves left behind by the country’s “Dirty War.” His actions and investigation helped uncover the truth about what was an incredibly deadly series of crimes carried out over nearly a decade. Holding the regime in Argentina accountable set a valuable precedent and demonstrated the global community’s commitment to upholding justice and human rights, which must be maintained today.
After Argentine president Isabel Perón was deposed in 1976, a military junta took over the presidency and government, establishing a dictatorship and placing all levels of government under military control. During the regime’s rule between the 1970s and early 1980s, the dictatorship led by Jorge Rafaél Videla began to hunt down its left-wing political opponents and where tens of thousands were imprisoned and persecuted for their political beliefs. 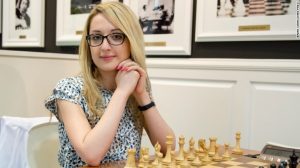 (CNN)Some of the world’s top female chess players are upset that the next world championship will be held in Iran, where players are expected to wear head scarves.
The US women’s champion, Nazi Paikidze-Barnes, will not be taking part in the event in Tehran next February due to her concern over the issue.
Meanwhile former Pan American champion Carla Heredia — who did not qualify for the Tehran tournament — also called for the 64 women who are playing there to protest against the hijab rule.
“Iran has hosted chess tournaments before and women were always forced to wear a hijab,” Paikidze-Barnes told CNN. “We don’t see this event being any different, forced hijab is the country’s law.”
This, she said, is “religious and sexist discrimination.”
She added: “If the venue of the championship is not changed, I will not be participating. I am deeply upset by this. I feel privileged to have qualified to represent the US at the Women’s World Chess Championship and to not be able to due to religious, sexist, and political issues is very disappointing.” 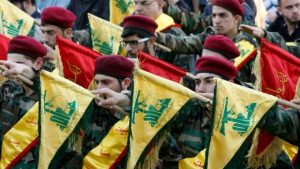 The Lebanese government’s tilt toward Iran has dangerous implications when it comes to countering Sunni radicalization.
Last week, a Lebanese military court sentenced local Sunni jihadi leader Sheikh Ahmed Assir to death. Assir has been in prison since 2015 for directing clashes between his supporters and the Lebanese Armed Forces (LAF) in Sidon two years earlier in which 17 soldiers were killed. While few Lebanese will shed a tear for Assir, the announcement of his impending execution nonetheless sparked Sunni protests across the state. For many Sunnis, the harsh treatment of Assir is emblematic of the Shi’a militia Hezbollah’s increasingly overt dominance in Beirut.

The story of Assir itself highlights Hezbollah’s preeminence in Lebanon. Back in 2013, the LAF engaged in a daylong military operation against Assir and 200 of his well-armed supporters in the Sidon neighborhood of Abra. Over the course of 25 hours, the LAF reportedly discharged some 400,000 rounds of ammunition while trying to dispatch the jihadis. Incapable of defeating Assir, the LAF called in Hezbollah backup, coordinating operations with the Iranian-backed militia to storm the militant’s stronghold and finally vanquish the group.

The Trump administration on Friday plans to roll out a new public campaign aimed at cracking down more forcefully on the armed wing of Hezbollah in Lebanon, part of a broader effort to counter the militant Shiite group’s chief backer, Iran.
The new push will include instituting cash rewards for its “most wanted” operatives, stepping up U.S. intelligence and law enforcement efforts, and also aims to enlist allies to do more to undermine the group’s global network, three administration officials told reporters Thursday.

The so-called Party of God, Hezbollah is also a powerful political bloc in the Lebanese government. It is an avowed enemy of Israel and has been responsible for a series of attacks against U.S. and other Western interests for decades. The State Department designated it a terrorist group in 1997.
The primary objective of the new public campaign, one administration official said, is to “expose them for their behavior” and seek to undermine Hezbollah’s political legitimacy in Lebanon.
“It’s a paradigm shift in how we view Hezbollah,” added another administration official involved in the effort who was not authorized to speak on the record. “While it strives for legitimacy, it is conducting terrorism.”

Trump will also apparently decertify the Iranian nuclear deal this same week, though he won’t announce the resumption of broad, major sanctions against the country. Instead, Trump will seek more targeted sanctions against the IRGC and other Iranian-backed groups in Syria and other nearby countries.
“It’s an integrated Iran strategy focused on neutralising and rolling back Iran’s malign activities regionally and globally,” the senior administration official said.
Part of the administration’s frustration with Iran stems from Iranian involvement in the Syrian civil war and its support of Hezbollah, which in conjunction with Russia’s efforts in the region, have totally stymied the United States’ attempt to topple the Syrian regime of Bashar al-Assad and bring about a new regime. 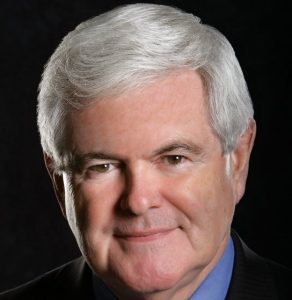 On Friday, October 20, 2017, Former House Speaker, The Honorable Newt Gingrich, will be the Keynote Speaker at a luncheon at the National Press Club. He will discuss the U.S. Iran Policy: The Way Forward as the President is conducting a top-to-bottom review of the policy on Iran. Ambassador Lincoln Bloomfield, former Assistant Secretary of State for Political Military Affairs, will moderate the event. 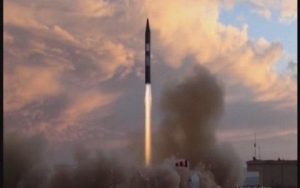 President Trump has been very clear about his strong commitment to combat the global scourge of terrorism and to combat those nations that support and enable it.
He has signaled his desire to build meaningful partnerships to achieve these goals and his focus in the Middle East is particularly relevant.
In his first speech to the United Nations General Assembly last month, the President unhesitatingly identified which players are our friends and which are our enemies in that unstable region.
Since taking office, he has strengthened ties between our traditional Arab allies, led by Saudi Arabia, with a determined and specific eye toward challenging a mutual, longstanding enemy, the Islamic Republic of Iran.
This approach should be taken a step further. In addition to working with supportive countries to confront Iran, there is a meaningful partnership to be built with an Iranian democratic resistance group with a global diaspora and significant presence in Iran itself – the NCRI (National Council of Resistance in Iran). 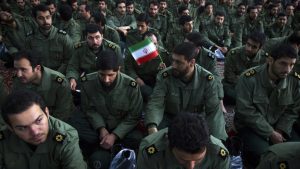 BEIRUT/DUBAI (Reuters) – Iran warned the United States against designating its Revolutionary Guards Corp as a terrorist group and said U.S. regional military bases would be at risk if further sanctions were passed.
The warning came after the White House said on Friday that President Donald Trump would announce new U.S. responses to Iran’s missile tests, support for “terrorism” and cyber operations as part of his new Iran strategy.
“As we’ve announced in the past, if America’s new law for sanctions is passed, this country will have to move their regional bases outside the 2,000 km range of Iran’s missiles,” Guards’ commander Mohammad Ali Jafari said, according to state media.
Jafari also said that additional sanctions would end the chances for future dialogue with the United States, according to state media, and issued a stark warning to American troops.

Two years into the nuclear deal with Iran – known as the Joint Comprehensive Plan of Action (JCPOA) – it has become clear that neither the people of Iran nor the region are better off.
The previous administration’s policy of engagement failed to address rampant human rights violations, regional aggression, a burgeoning missile program and the export of terrorism, all of which are crippling Iran’s own population.
President Trump came into office as a force of change; here are five ways he can change Washington’s culture of politics as usual and respond positively to the long-suffering Iranian people’s call for change:
Protect Pro-Democracy Iranians
Challenge Iranian Meddling
Get Tough on Ballistic Missiles
Stop Funding the Iranian Revolutionary Guard Corps (IRGC)
Get Serious About Regime Change 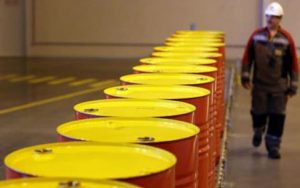 US Energy Secretary Rick Perry announced on October 5 that the first-ever shipment of US crude oil had arrived in India, as part of the new administration’s focus on energy dominance and edging Iranian oil out of the market.Perry said that this new “collaborative work” on energy between the US and India will increase jobs, economic stability, and national security in both nations.
He said: “This event represents the growing energy partnership between the U.S. and India, and I look forward to exploring new opportunities to expand the role of reliable, responsible, and efficient energy sources with our allies.”
The oil cargo, which arrived in India on October 2, was the result of Indian Prime Minister Narendra Modi’s recent visit with Donald Trump. After that, Indian companies began purchasing US crude oil, according to a statement from the Energy Department.