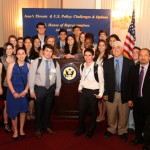 In a Statement, OIAC-US had noted that the agreement represents a significant retreat by the Ayatollahs but regrettably fails to block Tehran’s pathways to a nuclear bomb. Organization of Iranian American Communities (OIAC-US) is deeply concerned that the unwarranted concessions provides the extremist rulers in Iran tens of billions of dollars to further feed the roots of terrorism in the region.

Former U.S. Ambassador to Saudi Arabia James Smith talks about the nuclear agreement reached with Iran and the implications for Middle Eastern nations.

The Hill: Iran continues policy of death after nuclear deal