A Call for a Free Iran

Hundreds of thousands of Iranians and their international friends joined together in a historic and unprecedented virtual summit calling for a free Iran in the middle of a worldwide pandemic. The global summit was groundbreaking in technological and logistical terms, and it included high profile politicians and international dignitaries. 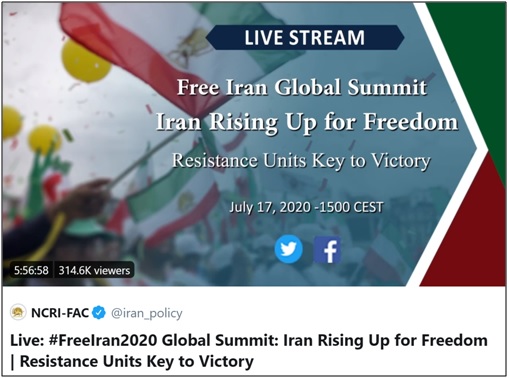 Some U.S. senators and House members either appeared live to deliver remarks or sent messages of strong support to the Free Iran summit. Comparing the Iranian rulers with the coronavirus, Patrick Kennedy said, “The virus of religious fascism needs to be extinguished.

High profile politicians and international dignitaries commended the opposition National Council of Resistance of Iran (NCRI). “The NCRI under Madam Rajavi offers the universal vision of freedom. The mere fact that a woman is leading such a group is revolutionary. If you listen to Khamenei and Rouhani, they have said that the only threat to their regime, the only organization that has a chance to put together a government to replace them, is the NCRI and the MEK,” Mr. Giuliani said, referring to the Mujahedin-e Khalq (MEK), the main component of the coalition of NCRI.

Former White House Director of Public Liaison, Linda Chavez also echoed Giuliani’s message, pointing out, “It is a real tribute to the organizational skills of the NCRI that we could pull together in the middle of a worldwide pandemic this kind of gathering … in support of freedom for the people of Iran.”

In 2018, French officials foiled a planned bomb attack against a large June 2018 “Free Iran” convention in Paris. The NCRI event in 2018 was attended by many high-level speakers, including former US House of Representatives Speaker Newt Gingrich, former New York City Mayor Rudy Giuliani, and former Canadian Foreign Minister John Baird. According to Reuters, an Iranian diplomat and several other individuals of Iranian origin were soon arrested in France, Belgium and Germany.

After a thorough investigation, French officials concluded that the Iranian regime was behind the bomb plot. If the attack had been successful, the loss of life would have been staggering, but the devastating toll it would have taken on the community that fights for human rights would have been immeasurable.

The weakened fundamentalist regime is confronting a younger generation eager for change. Mrs. Maryam Rajavi, the NCRI President-elect, said: “Today in Iran, one of the greatest battles and one of the greatest tests of our time rages on between freedom and religious fascism … This is a battle intertwined with the destiny of contemporary humanity and global peace and security. We pledged to overthrow the regime, take back Iran and restore all the violated and plundered rights of the people of Iran.” Senator Lieberman stated, “I’m proud to join you to say that I stand with Maryam Rajavi.”

But if the regime is nearing its end, what is the alternative? Several of the high level speakers believe that the oppositional group is the alternative. For example, Tom Ridge stated, “We’ve come together to publicly, proudly and loudly profess our support for Madam Rajavi, the NCRI, the MEK and for the cause of freedom.” “As America looks for ways to change this regime and to end this threat to our security from the regime in Iran,” Mr. Lieberman explained, “there is no better ally and there is no more natural alliance than with the NCRI.”

The Iranian regime seems to fear the soft power of the dissidents and opposition more than the hard power of foreign governments.