Christmas party to celebrate the joy of the season

Persian lunch & pastry will be served 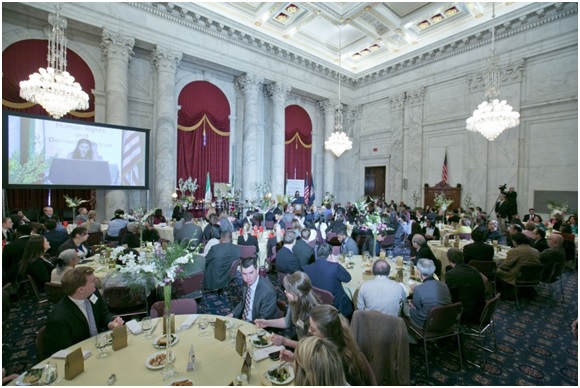 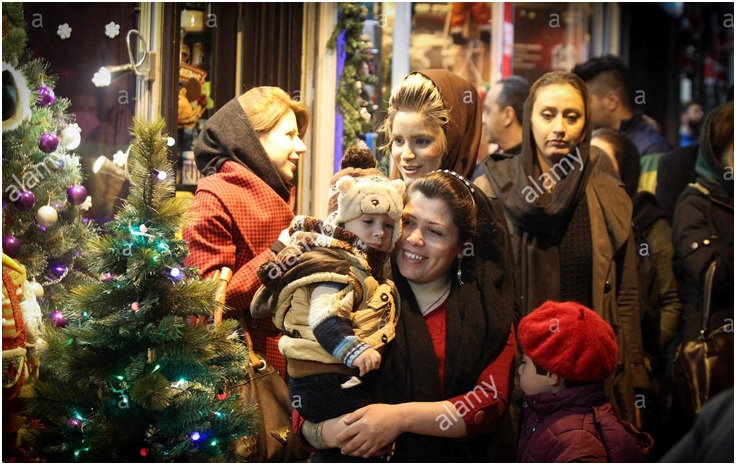 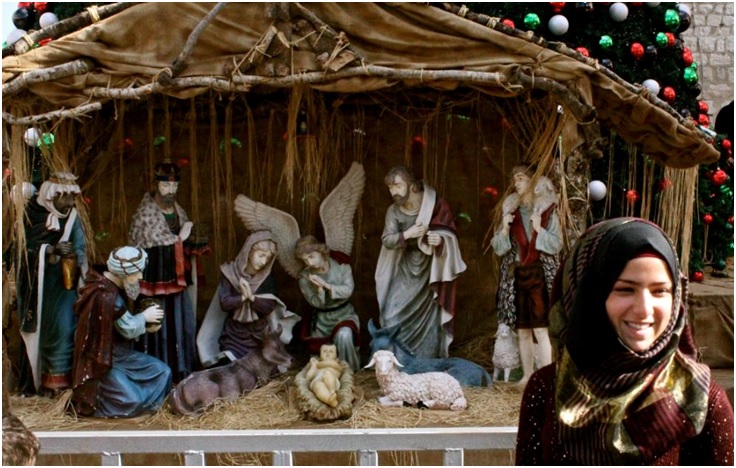 Iran’s treatment of its Christian minority has come under fresh scrutiny in recent months with some damning verdicts on the country’s human rights record.

as part of a widespread violation of international laws.

As national elections draw near (voters go to the polls on June 14), Iran is under increasing international pressure to improve its human rights record or face continued sanctions – sanctions ICHRI says are impacting the welfare of the Iranian people. In its April report, A Growing Crisis: The Impact of Sanctions and Regime Policies on Iranians’ Economic and Social Rights, ICHRI says that, rather than damaging the Iranian regime, sanctions resulting from Iran’s nuclear program have “brought about a severe deterioration in the ability of the Iranian people to pursue their economic and social rights”

The UN’s Special Rapporteur on Human Rights in Iran, Dr. Ahmed Shaheed, noted in September 2012 that more than 300 Christians have been arrested and detained since 2010, while at least 41 were detained for periods ranging from one month to over a year, sometimes without official charges.

President Mahmoud Ahmadinejad said in February that Iran “refuted” the UN’s claim of an increase in discrimination towards religious minorities, claiming “all people of Iran regardless of their religion or ethnicity enjoy equal citizenship rights”.

However, ICHRI’s January report, The Cost of Faith: Persecution of Christian Protestants and Converts in Iran, based on interviews with 31 Iranian Christians between April 2011 and July 2012, claims that, “despite the Iranian government’s assertions that it respects the rights of its recognised religious minorities, the Christian community in Iran faces systematic state persecution and discrimination”.

“Sometimes the phrase ‘systematic persecution’ is used so loosely that it sounds like a cliché. However, in the case of Iran’s persecution of Christians, it fits the criteria,” Borji told World Watch Monitor.

“Arbitrary arrests and imprisonment, severe restrictions on worship services in Farsi language, a ban on the publication of Bibles and Christian literature in Farsi, threats and harassment of evangelical church leaders, and continued attempts to confiscate church properties – these are all pieces in the puzzle.

“In a nutshell, there is a systematic attempt to deprive churches of membership, literature, leadership training and development, communion with other Christians around the world, and the right to freedom of religion guaranteed by the international covenants that Iran is a signatory of.”

“Sometimes the phrase ‘systematic persecution’ is used so loosely that it sounds like a cliché. However, in the case of Iran’s persecution of Christians, it fits the criteria.”

The Cost of Faith states that Iranian Protestants face the “most severe” restrictions on religious practice and association, through “arbitrary” arrests and detentions, state execution and extrajudicial killings.

The number of Christians in Iran was recorded by the World Christian Database in 2010 as fewer than 300,000 (0.36% of the population). “Ethnic Christians” from predominantly Armenian (100,940) or Assyrian (74,000) descent comprised the majority of this figure, while 25% (fewer than 70,000) were Protestants, the bulk of which are understood to be converts from Muslim backgrounds.

It is impossible to know the precise number of Christians in Iran due to the perils of professing a Christian faith (particularly for those from Muslim backgrounds), but the figure seems likely to be significantly larger than recorded. Some Christian organisations, such as Iranian Christians International, claim the number of converts alone could be as high as 500,000.

Many Christians in Iran attend underground house churches, which have grown in popularity since 2001. ICHRI attributes this to “growing repression”. 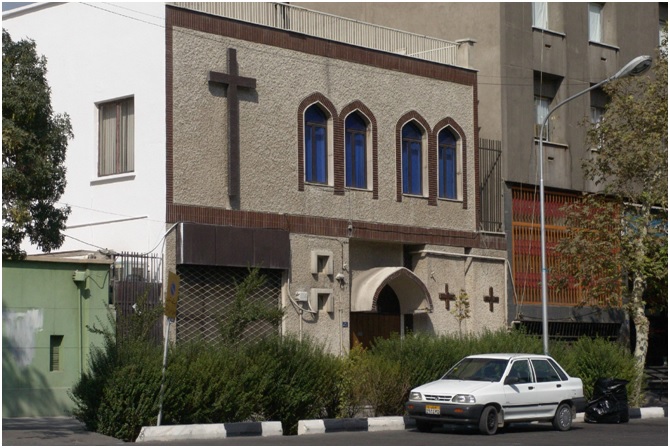 “Theoretically, Protestants, along with Armenians and Assyrians, are among the Christians recognised in the Islamic Republic’s constitution. In practice however, they have been persecuted and discriminated against, and have faced significantly more aggressive government restrictions and human rights abuses than ethnic Christian groups,” states The Cost of Faith.

Iran fails to comply with a number of laws set out in the International Covenant on Civil and Political Rights, according to ICHRI, including Article 18, which obligates all countries to safeguard freedom of religion.

In a speech to mark the launch of the UK’s FCO report in April, Foreign Secretary William Hague said that all citizens have certain “unalienable rights”, which are “universal” and not an attempt to spread Western values. These rights, he said, include freedom of religion.

Iran’s appreciation of this freedom comes under serious scrutiny in both reports through a number of examples of Christians in Iran who have been arrested and detained, “often without fair trial or legal representation” (FCO).

Last September’s release of Pastor Youcef Nadarkhani, who had been sentenced to death for apostasy in 2010, is hailed in the FCO report as a “rare positive outcome following sustained pressure from the international community”.

However, Alistair Burt, FCO Minister with responsibility for Iran, said the arrest “should not have taken place” and called on Iran to “respect the religious freedom of its citizens”.

Pastor Nadarkhani was re-arrested on Christmas Day, but released on January 7. In March, photographs of a man being hanged were attributed as evidence of the pastor’s death, but these were later refuted.

“Despite the Iranian government’s assertions that it respects the rights of its recognised religious minorities, the Christian community in Iran faces systematic state persecution and discrimination.”

A number of other Iranian Christians remain in what the UK’s FCO labels “harsh conditions” in prison, including Pastor Behnam Irani, who is said to be in ill health; Farshid Fathi, who after 15 months in detention was sentenced last year to six years in prison; and Saeed Abedini, an Iranian-born American pastor who in January was jailed for eight years.

After his incarceration, Abedini’s wife Naghmeh Shariat Panahi told World Watch Monitor that she feared she wouldn’t hear her husband’s voice for the duration of his imprisonment unless the international community fought for his release.

The Cost of Faith claims the bulk of arrests of Iranian Christians are “arbitrary” and political, rather than because of any crime committed.

The most common charges, according to the report, include “propaganda against the regime”, “acting against national security”, “contact with a foreign enemy or anti-regime group” and “colluding with enemy foreigners”.

Apostasy remains “uncodified” in the Iranian constitution, which according to the The Cost of Faith creates a loophole that could lead to the legal prosecution of Christian converts.

“The Iranian constitution explicitly instructs judges to utilize Islamic legal sources where crimes and punishments are not covered by the code, leaving the door open for the continued practice of relying on jurisprudence that holds apostasy to be a capital crime,” ICHRI stated.

In his latest report in March, the UN Special Rapporteur called on Iran to improve its human rights record by putting a stop to “continued widespread systemic and systematic violations of human rights”, including discrimination against Christians.

“Christians should not face sanctions for manifesting and practising their faith,” said Dr. Shaheed. “Christians are reportedly being arrested and prosecuted on vaguely-worded national security crimes for exercising their beliefs, and the right of Iranians to choose their faith is increasingly at risk.

“Christian interviewees consistently report being targeted by authorities for promoting their faith, participating in informal house-churches with majority convert congregations, allowing converts to join their church services and congregations, and/or converting from Islam. A majority of interviewees that identified themselves as converts reported that they were threatened with criminal charges for apostasy while in custody, and a number of others reported that they were asked to sign documents pledging to cease their church activities in order to gain release.”

The Iranian Revolutionary Court sentenced 18 Christian converts to a total of 23 years in prison for evangelism and establishing house churches. Such a harsh ruling once again proves that the situation of Iranian Christian converts is degrading in the country. 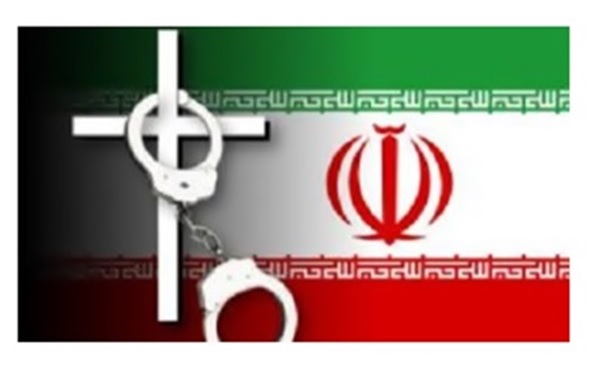 Mohabat News – MAY 22, 2015 The Revolutionary Courts in Esfahan, Rasht, Tonekabon, and Karaj have sentenced 18 Christian converts to 23 years and nine months in total over the past two months. These sentences have been confirmed in an appeals court and are final.

Confirming this report, Mansour Borji, spokesman for the Article 18 Committee, said, “Although these prison sentences are final, some of these Christian converts are determined to appeal again to a higher court”.

A number of Christian converts mentioned in this report were arrested in 2013 in Shahin-Shahr near Esfahan. Their names are: Nasrin Kiamarzi, Sarah Fouladi, Maryam Bateni-nia, Akbar Ahmadi, Bita Ja’fari, Abbas Kiani, Fatemeh Zareie, Masoumeh Dashti, Ramin Bakhtiarvand, Neda Fouladi, Samira Fouladi, and two unnamed individuals. The Revolutionary Court in Esfahan sentenced each of the above mentioned Christians to one year in prison and two years ban to leave the country for evangelism and forming house church gatherings.

Mr. Borji stressed that none of these individuals have a criminal history and they have been found guilty in a court for the first time. He said, “We did not have permission to publish the names of five of these Christian converts, so we just referred to their number and the place of their arrest in Rasht, Tonekabon, and Karaj”.

Earlier Mr. Borji had explained that the Christian converts in Esfahan were arrested in a raid on their house church in Shahin-Shahr on February 20, 2013. A month later, they were temporarily released on bail, and were free until their day of trial.

Regarding the current situation of Christians in Iran, Mr. Borji said, “The Islamic regime of Iran treats Christians cruelly, while Iran’s Foreign Minister, Mohammad-Javad Zarif, claims that no one is in jail in Iran for their beliefs. Despite President Rouhani’s promises in his campaign, not only do we see no relief of suppression of Christians, but we see an increase in the number of arrests and unfair sentences and the security atmosphere imposed by the Islamic regime on the Iranian Christian community still continues.

The first 2015 report by Ahmad Shaheed, the UN’s Special Rapporteur on Human Rights in Iran, indicates a decline in the situation of Iranian Christians. According to the report, as of January 1, 2015, at least 92 Christians have been arrested or are awaiting trial for their faith. By comparison in 2014, 69 Christian converts were arrested by Iranian authorities and held in jail for at least 24 hours.

This is all happening while Iran’s Supreme Leader, Ali Khamenei, stated in his visit with the religious minority members of the Islamic Majlis (Parliament), that based on Islamic teachings, “followers of other religions should be treated with justice and fairness”.

Although Iran’s Islamic regime does everything in its power to impose and promote Shi’ite Islam as the state religion, to pressure religious minorities and punish conversion out of Islam with capital punishment, the trend among Iranian Shi’ite Muslims to convert to other religions, especially Christianity is ever increasing.

Dual Nationals Treatment Under Ahmadinejad and Rouhani | OIAC US