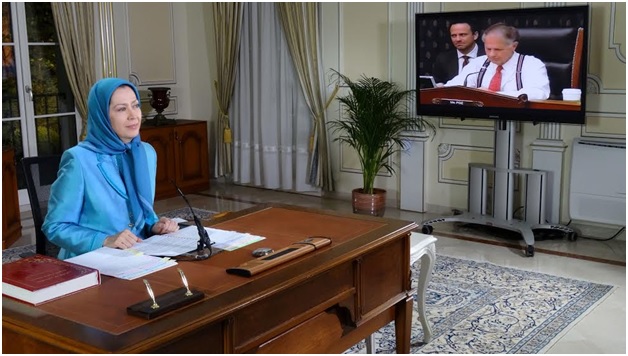 On Wednesday, April 29, 2015 President-elect of the National Council of Resistance of Iran, Mrs. Maryam Rajavi testified by Video Conference before the Subcommittee on Terrorism, Nonproliferation and Trade of the US House Foreign Affairs Committee on Islamic fundamentalism, emergence of ISIS and ways to confront this phenomenon.

The Subcommittee Chair, Congressman Ted Poe, welcomed Mrs. Rajavi, reiterating Mrs. Rajavi’s authority to discuss this issue given her knowledge of this issue of Islamic extremism. In response to an orchestrated move by certain lobby of the Iranian regime to disrupt the hearing and Mrs. Rajavi’s testimony, spokesperson for Chairman Poe said that invitation to Mrs. Rajavi enjoys the approval of the full House Foreign Affairs Committee. State controlled media in Iran wildly reported efforts to disrupt the hearing which among others included outdated false allegations against the Iranian Resistance.

Two dozens of former senior U.S. Government officials and Ret. military leaders welcomed congressional invitation to Maryam Rajavi. In a press released the U.S. dignitaries said “As a Muslim women advocating a tolerant and democratic interpretation of Islam, individual freedom, separation of religion and state, gender equality, and rejecting the implementation of Sharia law, Mrs. Rajavi represent the opposite of the misogynous Iranian regime’s rules and all Islamic fundamentalists and extremists.

“Mrs.  Rajavi’s personal experience in leading a popular movement against the religious dictatorship ruling Iran make her the right person to give testimony on this important issue.” 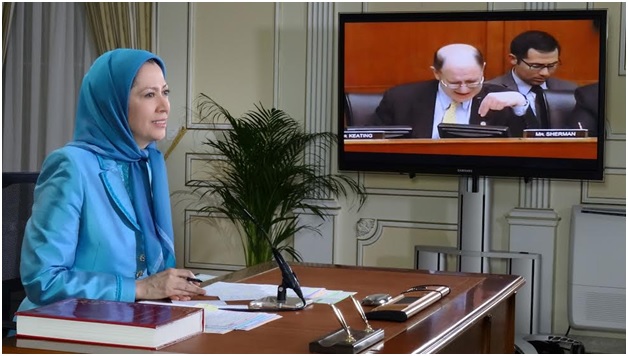 In her testimony , Mrs. Rajavi stated “Today, Islamic fundamentalism and extremism, under the name of ISIS or Shiite paramilitary groups, have launched a vicious assault on countries in the region and beyond including America and Europe.”

She reiterated her long held view that “Iranian regime has served as the main source of this ominous phenomenon in the region and across the world”, adding “The primary objective of Islamic fundamentalists, including ISIS, is to establish an Islamic Caliphate and enforce Sharia law.”

The President-elect of the NCRI said “aggressiveness and violence are two common features of Sunni and Shiite extremists,” concluding “as such searching for moderates among them is an illusion.”

“The experience of the past three decades shows that in the absence of a firm policy vis-à-vis the epicenter of fundamentalism, namely the regime in Tehran, there will be destructive consequences,” she said.

Discussing the roots of emergence of ISIS Mrs. Rajavi stated “crimes committed by the Quds Force and Bashar Assad in Syria and the massacre and exclusion of Sunnis in Iraq by Maliki coupled with Western silence, empowered ISIS.”

The NCRI President-elect added, “By acquiring a nuclear bomb, the Iranian regime seeks to upend the

regional balance of power and subsequently exert its hegemony over the whole region. 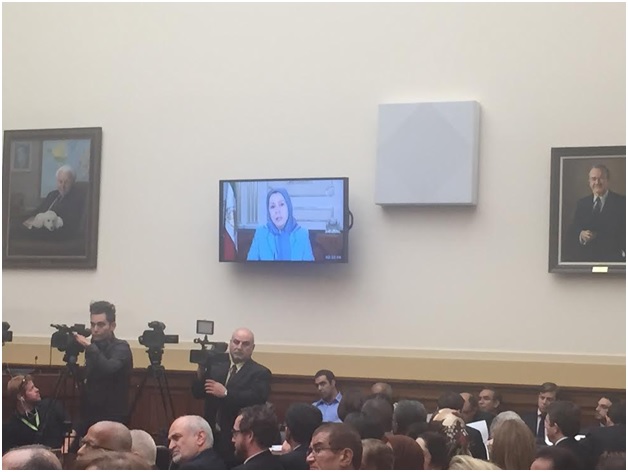 … It would be a fatal mistake to believe that silence and accommodation vis-à-vis the regime’s onslaught throughout the region would help advance the nuclear talks. Tehran is intimating this approach in different ways and, of course, has so far taken full advantage of it to advance its designs both regarding its nuclear projects and meddling in the region. Firmness in dealing with the regime will force it to retreat. Giving concessions to it, on the other hand, will embolden it to be more aggressive.”

“Our 36-year experience has made it palpably clear that the mullahs only understand the language of firmness and power,” Mrs. Rajavi stressed, warning, “Adding six or nine months to the nuclear breakout time while dealing with a regime that has been engaged in a three-decade game of hide and cheat does not provide a solution. The only guarantee to secure the world from the threat of a nuclear disaster is to fully implement six Security Council resolutions on Iran’s nuclear program, completely halt enrichment, and compel the regime to shut down its nuclear sites as well as WMD and missile programs.”

Mrs. Rajavi added, “Disarming and interning the PMOI/MEK (the main Iranian opposition and the only organized, anti-fundamentalist Muslim movement), its subsequent handover to Maliki’s puppet regime as well as silence and inaction vis-à-vis repeated attacks on its members in Iraq.  Referring to the pivotal role of the MEK as democratic Muslim movement as antidote to Islamic fundamentalism she reiterated her movement’s commitment to “separation of religion and state, gender equality, respect for rights of religious and ethnic minorities, and a democratic and non-nuclear Iran.”

She described the ultimate solution to Islamic fundamentalism and the ongoing crisis emanated from this phenomenon is “regime change by the Iranian people and Resistance,” underscoring that “The regime’s show of force is hollow and a result of weak Western policy.”

Mrs. Rajavi referring to the recent setback for the Iranian regime in Yemen and offered the following as the necessary steps to defeat Islamic extremism and resolving the current crisis in the region:

1.     Expel the Quds Force from Iraq and end the Iranian regime’s influence in that country;

2.     Enable full participation of Sunnis in power sharing and arm Sunni tribes to provide security for their communities;

3.     Assist Syria’s moderate opposition and people to end Assad’s regime and establish democracy in that country;

4.     Recognize the Iranian people’s aspirations to overthrow the mullahs and end inaction vis-à-vis the gross human rights violations in Iran.

5.     Provide protection for, and uphold the rights of members of Iran’s organized opposition, the MEK, residing in Camp Liberty in Iraq.

6.     Empower the true, democratic and tolerant Islam to counter fundamentalist interpretations of this religion; and

7.     Block all pathways for the Iranian regime to acquire nuclear weapons.