This replaces the Travel Warning for Iran of August 5, 2015, to reiterate and highlight the risk of arrest and detention of U.S. citizens, particularly dual national Iranian-Americans, in Iran.  All U.S. citizens should stay current with media coverage of local events and carefully consider nonessential travel.

Various elements in Iran remain hostile to the United States.  Since the United States and Iran reached a Joint Comprehensive Plan of Action to address the international community’s concerns over Iran’s nuclear program on July 14, 2015, Iran has continued to harass, arrest, and detain U.S. citizens, in particular dual nationals.

The U.S. government does not have diplomatic or consular relations with the Islamic Republic of Iran and therefore cannot provide protection or routine consular services to U.S. citizens in Iran.  The Swiss government, acting through its Embassy in Tehran, serves as protecting power for U.S. interests in Iran.  The range of consular services provided by the Foreign Interests Section at the Swiss Embassy is limited and may require significantly more processing time than at U.S. embassies or consulates.

Iranian authorities have unjustly detained or imprisoned U.S. citizens, particularly Iranian-Americans, including journalists, businessmen and academics, on charges including espionage and posing a threat to national security.  Iranian authorities have also prevented the departure, in some cases for months, of a number of Iranian-American citizens who traveled to Iran for personal or professional reasons.

The Iranian government continues to repress some minority religious and ethnic groups, including Christians, Baha’i, Arabs, Kurds, Azeris, and others.  Consequently, some areas within the country where these minorities reside, including the Baluchistan border area near Pakistan and Afghanistan, the Kurdish northwest of the country, and areas near the Iraqi border, remain unsafe. Iranian authorities have detained and harassed U.S. citizens, particularly those of Iranian origin.  Former Muslims who have converted to other religions, religious activists, and persons who encourage Muslims to convert are subject to arrest and prosecution. 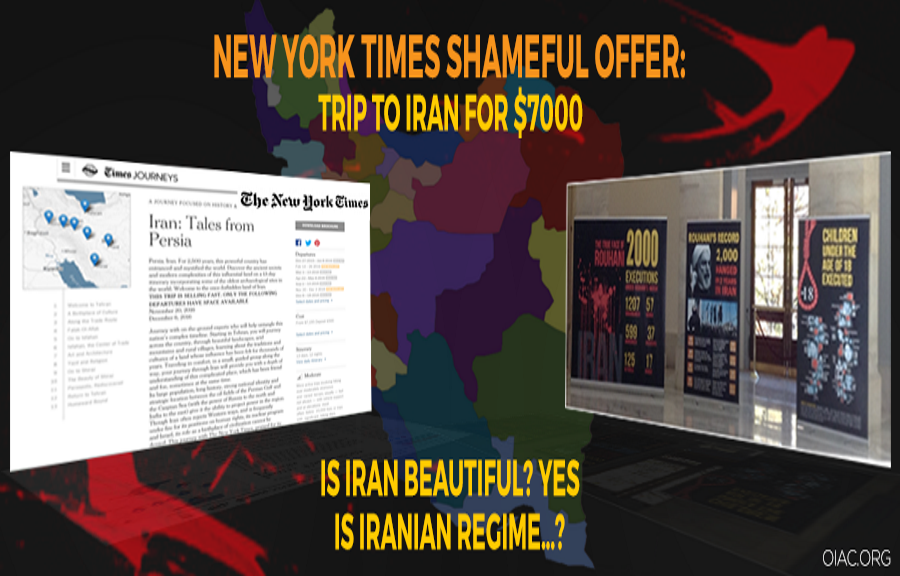 December 10, 2015
New York Time’s “Tales from Persia” is an affront to the people of Iran

“Tales from Persia” is the orientalist name given to the trips to see “beautiful landscapes, arid mountains and rural villages.” To be sure, Iran is a beautiful country. But it should not have been lost on New York Times that the country is ruled by a regime is not only a leading state sponsor of international terrorism, but has the highest execution rate in the world.

The regime in Tehran has an abysmal human rights record, which includes the systematic repression of dissidents and journalists. The regime continues to enforce barbaric censorship of the press, and routinely imprisons individuals for their thoughts and ideas. The world witnessed this brutality and repression in 2009 when peaceful protestors were met bullets and batons.

The questionable timing and odd decorum surrounding this trip raises a number of questions for Iranians and Americans, particularly in regards to whether the New York Times has any regard for the rights and freedoms of the Iranian people and journalists in the country.

Apart from the exotification of Iranian culture, the tour seemingly trivializes the reality of the Iranian people who continue to live in one of the most brutal dictatorships in the world. The call to visit a country and discover its “secrets”, while the regime executes individuals at a record pace, is disrespectful to the people of Iran and their aspirations for change. The New York Times should seek to be a voice for the people of Iran in their quest for change, and bring to light the stories and struggle of Iranian dissidents, activists and journalists who remain imprisoned inside the country.

Regime in Iran and ISIS Are Not Separate Challenges

Yes! Tim Scott is right. No use in negotiating with a power hungry, evil regime. We must stand firm with the people of Iran in their fight for #freedom and #democracy. #IranProtests #humanrights ... See MoreSee Less

The more and more awareness we bring to this regime, the closer we are to true freedom and democracy. It’s only a matter of time…#humanrights #IranProtests #FreeIran ... See MoreSee Less