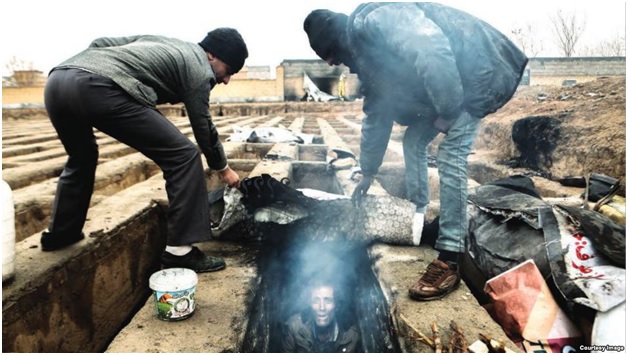 In a recent article published by Shahrvand or “The Citizen” newspaper, images of dirt-stained homeless Iranians living in empty graves in a cemetery outside of Tehran revealed the horrific situation of Iran’s most vulnerable.

It was a story that sent the nation into a frenzy, inspiring a large social media outcry from concerned citizens who blame the Iranian regime for the lack of care that these ‘grave dwellers’ receive.

Award winning director Asghar Farhadi wrote an open letter to President Rouhani reacting to the grave images in which he states,

“Today, I read a shocking report about men, women and children who are living in graves of a cemetery near Tehran in these cold nights and now I am full of shame and have tears in my eyes.”

His letter puts the responsibility of these grave dwellers on the Iranian government, which he views as out of touch with the harsh economic realities of the citizens of Iran.

Perhaps these accusations of the government being careless towards its citizens is linked to recently published payslips of senior government officials which revealed excessively high salaries. The revelation that those in power were receiving roughly fifty times more than lower paying government jobs shocked and angered the Iranian people, many of whom are feeling the negative consequences of a struggling economy.

Iran is going through a time of great economic stagnation despite the recent lifting of sanctions, and is suffering from a steadily climbing unemployment rate, especially amongst young adults who are making their way into the workforce.

This is not the only case of alarming treatment for Iran’s homeless. There are also recent reports of homeless shelters being stuffed over capacity and children sleeping in cardboard boxes.  Considering President Hassan Rouhani’s campaign promises of social justice reform, many citizens are feeling misled and lied to by the “progressive” president. Without a doubt, these revelations regarding Iran’s homeless put a spotlight on the growing economic inequalities in the country.

The homeless that were living in the graves in Tehran were reported to be mostly drug abusers who avoid going to homeless shelters. In Tehran, many homeless avoid the shelters, whether because of over crowding, lack of resources, or rules preventing drug use on the premises. However, it is also reported that women and children were amongst the grave dwellers, and many had lived there for over ten years. It seems that these graves were serving as permanent places of residence for at least some of the 50 individuals detailed in the Shahrvand story.

President Rouhani responded to the negative remarks regarding his governing and the outrage regarding the homeless grave dwellers by saying a few words at a session in Tehran in December. He lamented that the situation of the grave dwellers was “unacceptable” and blamed “corruption” and a lack of unity for the issue. He called on Iranians to unite together and “stop partisanship” in order to solve the social ills of the country.

Critics wonder what Rouhani means by calling for unity at a time when top government officials are living in a completely disconnected economic reality from their citizens. Questions of Rouhani’s sincerity when calling for social justice are reflected in social media comments from Iranian citizens who are frustrated by their government’s lack of care for its most vulnerable. One twitter post shows a comic of an Iranian family huddled in a grave with the caption, “State provided homes “graves” for the poor in Iran.”

Since the story was released, it has been reported that the grave dwellers were forcibly removed from their grave homes and taken to a rehabilitation center.

It is clear that there are glaring issues with the situation of economic equality and the treatment of the homeless in Iran. This is why at Organization of Iranian American Communities (OIAC), we believe that total change and a Free Iran is necessary in order to ensure dignity and respect for all Iranian citizens, and we condemn the presidency that has allowed for such barbaric treatment of its most vulnerable.