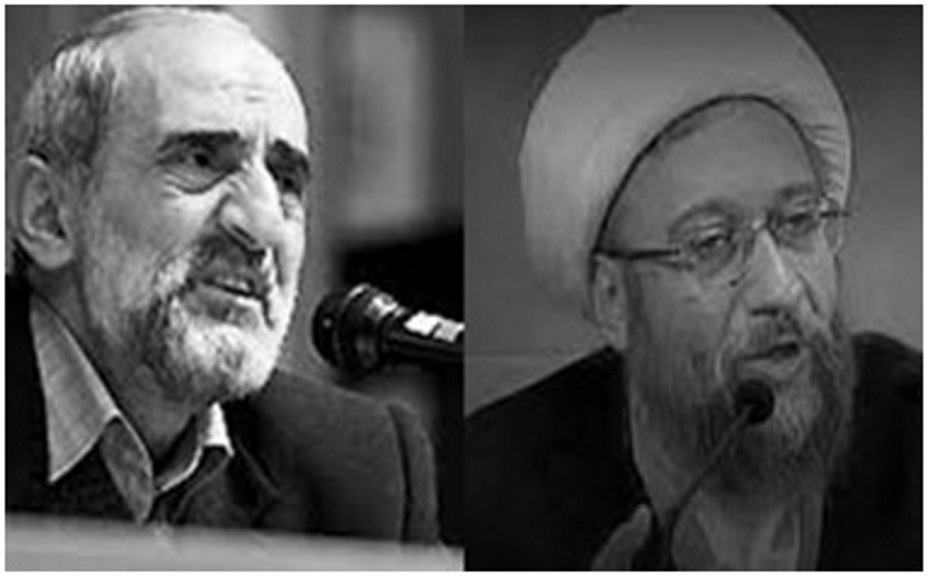 INU – In the days immediately following Friday’s Islamic State terrorist attacks in Paris, the conservative Iranian media and some of the highest representatives of the clerical regime have issued a variety of reports, editorials, and statements blaming Europe and the United States for the attacks and for the very existence of ISIS.

The National Council of Resistance of Iran summarized and provided English language excerpts from a number of these communications on Tuesday, for instance quoting judiciary head Sadeq Larijani as saying, “Those who supported and facilitated the entry of terrorists to Iraq and Syria, today face the consequences… The main question is who created these people? The Americans and Europeans are responsible for this.”

Larijani naturally ignored a wide range of statements from foreign policy analysts across the globe identifying Iran’s policies toward Iraq and Syria as a major contributor, if not the primary contributor to the conditions leading to the formation and growth of the Islamic State. In Iraq, the government of former Prime Minister Nouri al-Maliki drastically marginalized Sunnis throughout the country and consolidated power into the hands of a small number of Iran-allied officials. And in Syria, Iran’s defense of Bashar al-Assad prevented his dictatorship from being toppled by a coalition of moderate opposition groups in the early days of the Syrian Civil War.

In both cases, Iranian influence contributed to a deeper sectarian divide, apparently driving more Sunnis into the arms of the Islamic State. Insofar as Tehran refuses to acknowledge this while attempting to shift blame onto unspecified European and American policies, many analysts have concluded that the Islamic Republic is not interested in truly combating the Islamic State but would rather use it as justification for anti-Western activities and rhetoric.

This perception is supported by the fact that the vast majority of Iranian activities in Syria have been directed against moderate rebel groups, while conflict with the Islamic State has apparently been primarily aimed at confining it to regions mainly populated by Sunnis.

The NCRI identified Larijani’s and other attacks on Western policy as part of an effort to compel Western governments to concede to Iranian strategies in the Middle East, including the preservation of the Assad regime and the reduction of the Syrian Civil War to a conflict between that and the Islamic State.

Indeed, at the same time that Iranian clerical and media figures have been issuing such statements on the Paris attacks, its diplomatic officials have been transparently pushing the US and its European and Middle Eastern allies to drop their demands for Assad’s removal as a precondition for a political solution to the crisis.

The latest statements to that effect may suggest that in the wake of the Paris attacks, Tehran sees itself as being in an even better position to make such demands. Earlier this month, Iran attended for the first time an international security conference on the Syrian crisis. At the time, Iranian delegates rejected all proposals for a transition to a post-Assad government. And now that a new round of the talks have begun in Vienna, the Iranians have doubled down by not only refusing to compromise but also insisting that additional delegates be brought in on their side of the issue.

The Kuwait News Agency reported on Tuesday that Iranian Deputy Foreign Minister Hossein Amir-Abdollahian had asked for Iraq and Lebanon to be invited to subsequent sessions of the conference – two nations over which Iran wields considerable influence.

Following the Paris attacks, a visit to Europe by Iranian President Hassan Rouhani was cancelled and Foreign Minister Javad Zarif, who was scheduled to accompany him, was instead dispatched to the Vienna talks, where he gave additional legitimacy to his deputies’ positions. Amir-Abdollahian described the ensuing talks as “positive” in spite of the continued disagreement, implying that Iran is confident it can win out in the negotiations.

But so far, the US and its allies have refused to capitulate on the issue of Assad’s removal. But it remains to be seen how they will all react to the perception of an even more urgent threat from the Islamic State. At the same time, it also remains to be seen how long Russia’s current support for Iranian strategy in the region will last. There has been much speculation that Moscow would be willing to relinquish its own support for Assad, and reports on Monday indicated that Russian President Vladimir Putin had agreed with his US counterpart on the need for a post-Assad transitional government.

On the other hand, many of these reports of pending Russian cooperation are counterbalanced by reports of expanding cooperation and a closer alliance among Russia, Iran, Iraq, and Syria. UPI reported on Tuesday that a Russian company had arranged to help Iran repair and upgrade specific types of helicopters, and also to build a helicopter repair facility.

While this does not say much on its own, it comes soon after news that the Russian government and a major Russian bank were poised to provide Iran with a total of seven billion dollars in loans. It also comes in the midst of the pending delivery of an advanced missile defense system from Russia to Iran, whose military officials and Revolutionary Guards have routinely boasted that such advancements would make the Islamic Republic better able to confront the US in open combat.

Iran’s overall closeness to and military collaboration with Russia has given Iran cover to expand its operations in the Middle East and also to spread more anti-Western rhetoric, as it has noticeably been doing in recent weeks. The statements on the Paris attacks are only some of the latest examples of this. Others include Supreme Leader Ali Khamenei’s ban on further negotiations with the US, and the attempts by security forces to link domestic arrests to American and European “infiltration.”

What’s more, Iran’s current alliances and their surrounding conditions seem to have given the regime the confidence to not only attempt to dictate policy to the West, but also to refuse cooperation with competing powers in the Middle East. Agence France-Presse reported on Tuesday that Iranian Oil Minister Bijan Zanganeh had declared that Iran would dramatically expand its oil output soon after the removal of sanctions under the July 14 nuclear agreement. He pointedly said that Iran would notify the other member states of the Organization of Petroleum Exporting Countries before completing these steps, but would absolutely not consult or negotiate with them.

Zanganeh couched this statement in notably aggressive terms, saying that “those who took advantage” of Iran’s diminished presence in the oil economy under the sanctions regime “should worry” about the consequences of the nation’s anticipated return to full strength.

This return, however, still depends on foreign investment. Notwithstanding the expansion of anti-Western rhetoric, AFP indicates that Iran is still pursuing such investment from prospective Western partners. And according to Iran’s Payvand News Agency, at least one Washington think tank anticipates that this investment is forthcoming and that Iran will indeed restore its oil economy to pre-sanctions levels of output within three months.

The Institute of International Finance reportedly projects that Iran’s growth will significantly outpace that of the rest of the Middle East and North Africa during the coming year. However, this growth could still be interrupted by Iran’s failure to fulfill its obligations under the nuclear deal. And more than that, it could possibly be halted if the expansion of Iran’s anti-Western rhetoric leads Western businesses to believe that Iran will still not be a safe place for their investments.